How to make moccasins

You should certainly try your hand at making this very Scouty form of footgear if you aim at being anything of a “buckskin man.” Don’t make the common mistake of calling them mocassins, though. The word is pronounced mok-a-sims, accenting the first syllable. But that is only by the way. What I want you to know is how to make the things, however you may pronounce the word. You know moccasins are the jolliest, most comfortable things to wear; whether you use them as slippers in the house, or for knocking about in camp, or, best of all, to put on at the end of a long day’s hike; there’s nothing more comfortable for tired feet, as any old hand will tell you. Now you must know that there are many different types of moccasins; nearly every Indian tribe has its own pattern, and the plains Indians wear a moccasin totally different from that worn by the tribes living in the hills, where there is much snow. The kind we are going to make is adapted from those worn by the Ojibways, whom you will know if you have read Thompson Seton, get their name from the fact that they wear puckered moccasins. The word “Ojibway” simply means “puckered shoe.” Well, now, let’s get down to it. First of all, the material and tools required. The Indians used buckskin, moosehide, and in some parts Dan Beard says he found them using calfskin and cowhide; so if you can afford to buy some fairly stout pliable leather from a bootmaker or saddler it will do splendidly, and will stand any amount of wear; but if you only intend to make a

pair of bedroom slippers, something less expensive, like basil, will do very well. 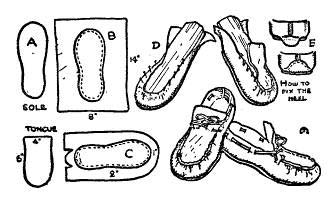 For each moccasin you will need a piece of leather about 14 in. by 8 in., and another piece about 6 in. by 4 in. These measurements are for an average small man’s foot, about size 6. The Indian moccasins of this type had no sole, but for our purpose a sole adds tremendously to their wearing powers, and you would do well to buy two fairly stout pieces of sole leather as well, one for each moccasin. For the rest, you will require a shoemaker’s awl, some waxed hemp and needles, and a piece of thick board to make a rough kind of foot-shape, called a “last.” This is not shaped exactly like a foot, but made like figure A out of a piece of 1-in. board. If you make it rather straight, and get it at the same length and width as your foot, there’s no need to make two, as it will do for either foot. Cut out the leather soles about a quarter of an inch bigger all round than this piece of wood, and then sew them to the underneath of the leather “uppers” as you see in figure B. If you are as observant as I take you to be, you no doubt have watched a friendly bootmaker sewing on a sole. He first of all takes his knife and cuts a little channel about half-way through the sole and about a quarter of an inch from the edge. Then he runs a blunt-pointed instrument round this cut to open it up, and sews his stitches at the bottom of the groove, boring a hole for each stitch with his awl and stitching with a waxed thread. You will remember, too, that before he starts working on the sole he puts it in a bucket of water for about ten minutes, then lays it aside for a bit until it is nice and workable. Another cobbling tip is to “beat” the leather well to increase its wearing qualities. To do this you borrow a flatiron, lay the leather side on it, rough on top, and hammer it well all over. Take care to bring the hammer down flat or you will break the grain of the leather. Well, having sewn on the sole, rub down the flange, that is the cut you made, on top of the stitches, and tap it down all round with the hammer, and you will find the stitches are perfectly hidden. The next job is to shape the “uppers” like figure C. Note that it is only 1 in. wide at the toe, gradually widening out to 2 in. at the sides.

Cut out the sole, and place it on the underneath of the leather as illustrated in B. C shows you how to shape the “upper.” Place the dummy foot inside the “upper,” draw the leather over, and tack round as in D. Now cut out a tongue and sew inside as illustrated in the right-hand picture of D. E shows you how to fix the heel. Then finally you see the finished moccasins Then you soak it in water, place the wooden foot inside and shape the “upper” over the toe by pulling and banging and rubbing it into position; tack it round as you see in figure D to keep it there temporarily. You will find that it has a series of puckers all along the top edge. Try and get these as even as you can, and put in a tack for each pucker. Now cut out the tongue from your piece of 6 in. by 4 in. leather, and begin to sew it in, starting at one side. The way to dispose of those troublesome puckers is to let the stitches take up more leather on the outside than on the inside. Make about six stitches to the inch outside and about ten to the inch inside. This sounds a bit complicated, but you will find it works out all right. When you have sewn right round, cut off the edges quite level and hammer the toe into shape. The leather will go almost anywhere when it is wet. Now turn your attention to the heel. You will see how it is cut by referring to figure C again. Slip your foot in to find how much you need to cut away, then sew the two edges together like the top drawing in figure E, and finish off by sewing up the flap as shown at the bottom of figure E. All that now remains to be done is to cut slits or punch holes, through which to run a thong. The sketch of the completed moccasins makes this and the method of lacing and fastening off quite clear. Making these moccasins is perhaps the most difficult job I have given you so far, but if you have followed the instructions carefully you will have a pair of moccasins as good as, or better than, any the Red Indians make. They are very roomy and most comfortable. I have a pair by me as I write in which I have tramped many a mile without getting footsore, and they cost about 7s. 6d., which is not expensive as shoes go nowadays. So get busy and cut down the parental boot bill. [1]

Retrieved from "http://en.scoutwiki.org/index.php?title=Spare_Time_Activities/How_to_make_moccasins&oldid=32250"
Category:
Cookies help us deliver our services. By using our services, you agree to our use of cookies.