IT is always a good thing to see a chap striking out a line for himself, and not simply taking things for granted with out thinking. Take that very essential bit of uniform, the belt, as an example. Most Scouts are content to take the ordinary shop belts. Why not have a shot at mailing a really Scouty belt for yourself? If you look at the sketches you will see various gadgets and ideas from which you can work out a belt of your own. You can, if you wish, make a fine comfortable belt on the same lines as the plaited hatband which we dealt with in Chapter IV. Then you would have your belt and hatband to match. You can turn back to that chapter for details of the plaiting and so on, and then look at diagrams 1a, 1b and 1c to see how the idea is applied to belt-making. You see a strap is needed one end and a buckle the other, or you could apply one of the other fastenings about which I shall tell you in a minute. In any case make your plait of strong leather strips. There is some ripping stuff called white hide sold by harness makers, ready cut into strips, which lasts practically for ever, and can be stained in brown if you wish. Diagram 1c gives you an idea of what this belt looks like. If this doesn’t appeal to you, perhaps you would like to tackle a real cowboy belt. Next time you go to the pictures you notice the cowboys’ “chaps” (those woolly trouser things they wear) and you will see that they are always buckled behind. 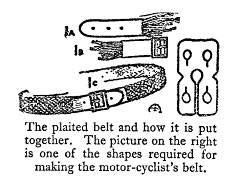 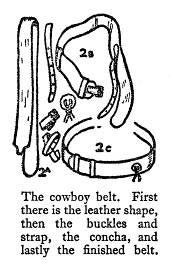 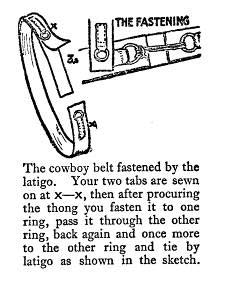 The reason is that the cowboys want to avoid anything which might catch up in their lariats or sleeves, and for the same reason this cowboy belt has no fastenings outside; they are hidden away under cover, as you see in diagram 2C. To make this belt, get a strip of leather about 2 in. wide and long enough to go round your body and overlap about 4 to 6 in. Shape this like diagram 2a. Then sew a small strap 8 in. long inside the belt at about 8 in. from one end, and a small buckle to take this strap on the other end of the belt. Dia- gram 2b shows you this. You then make two loops about ½ in. wide which you see at the lower end of figure 2a in the diagram. The one nearest the buckle is fixed, but the other is a slider. Now your belt is made, but if you want to hang a knife or whistle on it (though whistles are mercifully going out of favour nowadays) do not have swivels. They are abominations, and cause lots of nasty gashes, especially when playing rough-and-tumble games. Instead of swivels make a couple of leather rosettes rather like the cowboy’s conchas. Pierce two holes in concha and belt and thread a piece of lace or thong through, so that both ends come out in front. Cut a slit in each, close up the concha, and thread each end in turn through the other’s slit, then haul them up tight. The little sketch just above 2C shows you what it should look like before being hauled taut. Perhaps you would prefer to fasten off your belt with a latigo instead of a buckle. As a matter of fact the latigo is much better because you can adjust it to any degree of tightness, whereas a buckle has no intermediate stages between the holes. This belt is made of a strip of leather like the cowboy one, but shorter. It can quite well be about 4 or 6 in. shorter than your waist measurement, and you bridge the gap by sewing on a tongue long enough to give you a couple of inches overlap. See diagram 3a. Then you sew two strong brass rings on to the belt at x – x shown in the same diagram, attaching them by means of two little leather tabs. Next a piece of rawhide about 18 in. long by a ¼ in. wide is needed for the latigo. Attach one end of this to one of the brass rings by a rawhide splice, which is dealt with in Chapter V. To fasten the belt you pass the end of the thong through the other ring, back through the first ring and across to the other again where it is made fast by means of a latigo. Just follow it out in the picture. This latigo lash is used for tightening the girth of the cowboy’s western saddle, and, as you probably know, is the best knot to hold securely in rawhide. Perhaps that is really enough about belts, but there is just one more which you might like if none of the others appeal to you, and that is a sectional belt, as worn by motor-cyclists. All you have to do is to cut out a cardboard shape about 3 in. long and 3 in. wide (like the picture on the right of the plaited belt, diagram 1), and use this as a pattern. Lay it on your leather, mark round with a pencil, and cut out a couple of dozen or so of these sections. Double one section across the middle, then pass the split ends of the next section through the holes of the double section, doubling the second piece in the same way. Proceed in exactly the same way with each section until you have built up a sufficient length of belt. The ends present a little difficulty. You can use buckle and strap or rings and latigo. If you decide on the former, you must slip the buckle on to the first section before you start building up the belt, and then when you get to the last section, take a piece of leather about 6 in. long and the same width as the belt. Punch two holes in it the same distance apart as the holes in the sections, and lace the last section and the strap together in the same way as the concha is fastened to the cowboy belt.

Retrieved from "http://en.scoutwiki.org/index.php?title=Spare_Time_Activities/A_cowboy_belt&oldid=31466"
Category:
Cookies help us deliver our services. By using our services, you agree to our use of cookies.