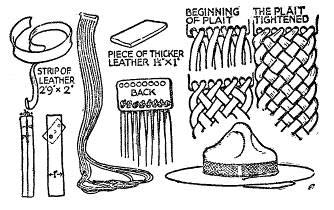 IT seems to be the fashion in some circles to decry the Scout hat as useless piece of uniform. This surely is a pity, for it is perhaps the most characteristic part of our uniform, and has captured the popular imagination ever since it was first brought into prominence twenty years and more ago when the Chief Scout was the hero of Mafeking. A stiff-brimmed, well-kept Scout hat adds that cowboy touch which we want, and proves that its wearer is a Scout who takes a pride in his uniform. On the other hand a floppy hat with no dents to speak of and a paper imitation leather hatband with a chin strap of the same material is a disgrace, and should not be seen except on a scarecrow, so see to it that your hat brim is kept stiff by an occasional ironing and washing with starch, sugar or seccotine mixed with water. And then you might further improve it by making a leather hatband. Here are instructions for making a very effective one quite easily and fairly cheap. Get a strip of leather 1½ to 2 in. wide and 2 ft. 6 in. to 2 ft. 9 in. long. This has to be split into six or eight strips. You can do this by means of a straight-edged piece of wood and a knife, but this is a difficult method, and results are rather poor, so it is well worth while to make the little gadget illustrated in the diagram.

When you have obtained the strip of leather, make the knife with two strips of wood and an old safety razor blade. Next cut the leather into strips, fix them into the small thick piece of leather, and commence plaiting. When you have done that to your liking, join round the hat, and the hatband is then complete. This is made out of two strips of wood 3/16 in. thick and about 1 in. wide. Between these – like the ham in a sandwich – you fix an old Gillette razor blade by means of two screws. You have then a cutter and a gauge in one. Fix your strip of leather to the table by a couple of drawing pins or tacks at one end. Get a pal to hold the other end and slice it up into six or eight thongs, each about 3/16 in. wide. Now make a tab of leather, as shown, about 1½ in. long by 1 in. wide and punch six or eight holes along each of the longer sides. Put one end of each thong through each of these holes. Cross them in pairs right over left and plait as shown in the drawing. You wall notice that each time you start with the outside thong alternately left and right. Keep the thongs close together when plaiting, so that no daylight shows through, and take care that they lie flat and even and do not twist. You will soon get the knack so that it becomes almost automatic. When you think you have gone far enough, just try it round your hat to get the right degree of tightening. Then put the ends of the thongs crossed in pairs through the other holes in the leather tab. Lay all the ends out flat and cut them off so that they meet in the middle at the back of the leather tab, or you can tie a thumb knot in each end. Then wet them and hammer them out flat, and if the thongs fit tightly in the holes they will be quite secure. Now dip the hatband in water and flatten it out all round, either with a hot iron or with a hammer. You can, if you wish, put on a finishing touch by using a little brown boot polish or just a rub of oil to take off the newness.

Retrieved from "http://en.scoutwiki.org/index.php?title=Spare_Time_Activities/A_smart_hatband&oldid=31461"
Category:
Cookies help us deliver our services. By using our services, you agree to our use of cookies.