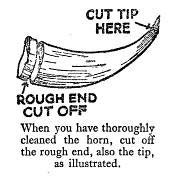 PROBABLY most of you chaps who are reading this don’t remember the year 1907. If you had chanced to be at a place called Brownsea Island one fine morning in that year you would have seen the very first Scoutmaster waking the very first Scouts in the very first Scout camp that was held. A good many of us since then have been roused in the mornings by the sound of réveillé blown on a bugle, but those first Scouts never heard a bugle in their island camp, for their Scoutmaster was none other than the Chief Scout himself, and the sounds that roused them came from the long, twisted horn of a kudu, a kind of buck, which the Chief had shot in Africa. Now after Brownsea, Scouts began to spring up everywhere, and a good many of them, probably because there are not many kudus which can be shot in England, took to using bugles instead, and so people gradually got the idea that the proper thing for every Scout troop to have was a bugle. Scouts should go about like parties of working woodsmen, and not imitate soldiers. So now we are getting wiser again, and harking back to the Brownsea ideas and leaving bugles in their proper place – that is, the Army. But we can’t all get kudu horns, and it’s no use slanging the poor old bugle unless there is something better to put in its place. So I want to tell you how to make a camp horn out of a bullock’s horn, which you can buy very cheaply, or even get for nothing, if you know a butcher who is a kindly disposed sort of chap. 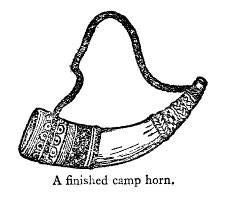 Having got your horn, the first thing to do is to get it clean. This is a nasty job, but the best thing to do is to boil it, and then you can get rid of the superfluous fat, and so on, more easily. Then when you have got it really sweet and clean you cut off the rough end as you see in the illustration, and start smoothing down the whole horn. If it is very rough you start with a blacksmith’s rasp, and then gradually work it down to a nice surface with sandpaper and a piece of broken glass. Next you cut off the tip of the horn as shown in the diagram. This is done with a saw – a hack-saw does very well, though you will find this a rather trying operation. After you have recovered, you drill a hole straight into the end of the horn, large enough to take the spigot of your bugle mouthpiece which you then drive in tightly. The illustrations make this clear. Failing a mouthpiece of this sort you can hollow out the end of the horn into a cup-shaped mouthpiece, but this is not so easy, though you could do it with a hot iron if you could endure the smell. Well then, having done all this, you now begin the real part of the work, that of ornamenting your horn. The one shown below has leather fixed on at each end. This is stretched over and sewn on firmly while wet, then it dries and shrinks tight. When you have got it on you could spend a lot of spare time embossing it similar to the illustration, or, better still, invent new designs of your own. Another way would be to plait strips of leather over the horn rather like basket work. This also looks very effective.

Then lastly the sling. The lariat plait is a good one to use – you probably know it was used by the Mexicans for making rawhide lariats. It consists of four strands. To make it, cross the two middle strands right over left, then put the outside right-hand strand across behind these two, and then down between them. Lastly, left-hand outside strand also goes behind the middle two and down between them. That is probably a bit difficult to follow. It all boils down to this.

You always work with the two outside strands, each alternately behind two strands, then down between the same pair. The part of the horn in the middle between the leather could quite well have the name of your troop branded on it, and perhaps a little brand of some sort to commemorate each camp in which the horn has been used. This can quite easily be done with a red-hot knitting needle or bradawl. A horn of this kind ought to be the treasured possession of any troop. It is thoroughly English in origin, being just like the horns which Robin Hood and his merry men once used.

Retrieved from "http://en.scoutwiki.org/index.php?title=Spare_Time_Activities/A_camp_horn&oldid=31474"
Category:
Cookies help us deliver our services. By using our services, you agree to our use of cookies.