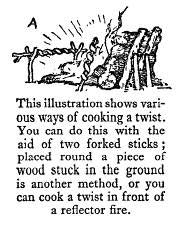 THE other day, to my intense surprise, I discovered that there are still many fellows who have never tasted the joys of making and eating flapjacks. This is terrible! I simply cannot imagine how any fellow who in any way considers himself a wood-crafter can go on making those abominable things which are generally served up as dampers when he might be eating flapjacks, which to my mind are quite the most delightful and edible form that flour and water can be made to assume in camp. There certainly is a bit of an art in making flapjacks, but it is an art well worth acquiring, even if you don’t succeed at first. This is how it is done. First of all get some flour. Take about a double handful of it, and put it in a basin; mix in some salt – a small salt-spoonful would be about right – and a couple of tea-spoonsful of baking powder. You need not use any baking powder if you are using self-raising flour, but personally I always use just a little baking powder. Then you mix all this together thoroughly before you put in any water, using a wooden spoon or a stick with which to do the mixing. Never use your hands more than you can help when making damper or twist or flapjack; you will get much lighter bread if you don’t handle the dough. Having mixed flour, baking powder and salt together, you add water, gradually stirring away with the stick all the while, until the mixture is about the same consistency as cream or Nestle’s milk. Stand the basin down for a few minutes while you get the fry-pan ready.

Now you must have a sensible fry-pan in which to cook flapjacks, a round one of iron or thick aluminium is best, and it must have a rigid handle, not a hinged one like those fry-pan lids of Army mess tins; you will see why in a minute. Having got your pan, you proceed to warm it by holding it over the fire for a little while; there’s no need to make it red-hot of course, half a minute does the trick. Then take a little grease of some sort, lard does very well, or bacon fat, but margarine is no good at all – there’s very little fat in marg. All that is needed is enough fat just to cover the bottom of the pan with a film of hot grease; so about a level teaspoonful is more than ample. 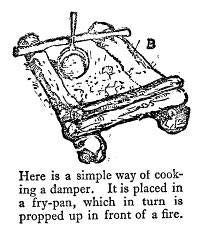 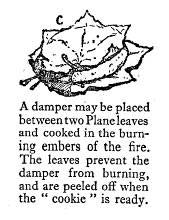 The backwoodsmen just rub the pan over with a piece of greasy bacon rind, so you see very little fat is required. When the fat is hot and gives off a film of smoke, pour in enough batter, nearly but not quite, to cover the bottom of the pan. Pour it in gently from the centre so that it spreads outwards; stop pouring when it gets to within half an inch or so from the sides. Very soon bubbles will begin to come up through the batter so that it looks something like a very thin crumpet. All the while this is going on – and it doesn’t take very long – you keep giving the pan a gentle shake so that the flapjack is kept sliding about on the bottom of the pan and so cannot stick. Now the supreme moment has arrived. Take the fry-pan in your right hand, give it a quick jerk, dipping the front down and then up quickly, and you will have the extreme gratification of seeing your flapjack turn a graceful somersault in the air and come down flop on its other side ; in the pan if you are lucky, or, as is more likely the first time, in the ashes.

You can practise this “flip” with a circular piece of leather or linoleum – this is as near the real thing as possible – and when you are good at this, chance your luck with the flapjack itself. Anyway, the knack soon comes, and then you will want to go on making and eating flapjacks all day, like some Scouts of a very famous Swift Patrol who were in camp with me once. Probably I ought to say a few words about making twist and damper. Twist is quite easy to make; you use the same proportions of flour, salt and baking powder as for flapjacks, but less water, of course. Probably you know the best way to mix the dough is to put a mountain of 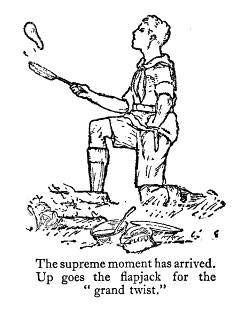 flour in the pan, make a crater on top of it, and gradually pour in water, stirring away with the wooden spoon until you have a nice spongy dough.

Leave it for a bit while you make the stick to wind your twist upon. This should be a piece of clean wood – birch for preference, but don’t use yew or holly – about 2 ft. long by, say, 1½ in. thick. Now the whole secret of twist making is just this: The stick must be heated first before winding on the dough. This ensures that the dough is cooked inside as well as out. So peel the stick and bake it well before winding on the ribbon of dough. Another essential is a really good fire of glowing embers. Oak or ash or thorn makes good fires, as you know, ash best of all, but it is no good trying to cook on a few blazing sticks. Diagram A shows the way to bake your twist, either on a couple of forked sticks or stones, or turves over a trench fire, or in front of a reflector fire, or you can just sharpen the end of the stick and drive it in the ground; but in any case don’t forget to heat the stick first. Damper is nearly always badly made by Scouts, There are lots of ways of baking it, probably the best way being to make your dough into thin, flat cakes, put them into a slightly greased fry-pan, hold over the fire to make them rise, and then prop up the pan in front of the fire as shown in diagram B. Another very sound “stunt” is to get a couple of Plane or other large leaves, put the damper, made into a flat cake, between them, and pop it on the embers, as shown in diagram C. The leaves prevent the damper burning, and when it is done all you have to do is to peel off the charred leaves, and there is the damper nicely baked. But remember to make the cake thin or it will be hard outside and pasty in the middle.

Retrieved from "http://en.scoutwiki.org/index.php?title=Spare_Time_Activities/Flipping_a_flapjack&oldid=31482"
Category:
Cookies help us deliver our services. By using our services, you agree to our use of cookies.