NEARLY everyone nowadays carries a sheath knife, and very handy it is too in hands that know how to use it, but a sheath knife is not for kids or fools. Both of these, not knowing that a big knife is entitled to be treated with respect, abuse it by trying to drive screws with it, or making it perform the function of a poker, or split firewood by hammering the back of the knife; one even tried using his Gilwell knife the other day to open oysters. Needless to say he broke off the point. Then there’s knife throwing – very nice when you know how to do it – but how many knives are minus the tips of their blades through unskilful throwing? If you want to acquire the knack – though I don’t know why you should, it is not the primary use of a knife anyway – get an old cheap one, and practise on something soft, not necessarily a brother Scout’s head, but a cork mat or a chunk of lime or other soft wood. At any rate, don’t start slinging knives at any tree you meet – it is simply not done by the best people – meaning ourselves. But the important thing for keeping your knife in good condition and in safety is a sheath, and here is one that you can make for yourself, which is far more satisfactory in use than the usual press stud affair generally sold with this type of knife. It is modelled on the cowboy’s revolver holster, and is not very difficult to make if you know how to sew leather. You need a piece of leather about five inches broad and a foot long in order to make the whole holster out of one piece, but you can make it quite easily out of two pieces, 12 in. by 3 in., the other, 8 in. by 2 in. If you decide upon the former, which gets rid of one seam, cut it out as you see in diagram A. Soak it well in water so that it is quite soft, then cut out of a piece of ¼-in. board a sort of wooden knife, roughly the same shape as your knife blade and about 8 in. long. This is to use as a mould on which to build the sheath, 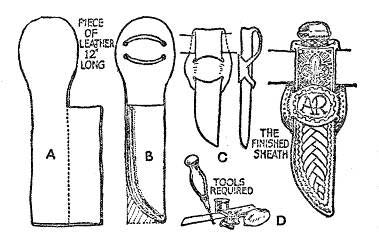 (A) shows the rough shape to which you must cut the leather. You next fold at the dotted lines, then sew as shown in sketch (B); also cut the slits depicted at the top. (C) shows the method of fastening the sheath to the belt. (D) shows the tools you require, and finally you have the finished article. Lay the leather on a board and fold it over this wooden knife, and stretch it well over, rubbing hard all round, where the edge of the blade comes, with the handle of an old tooth- brush, so that it shapes well all round. Then tack it here and there to the board, but do not cut it yet. Next pierce your holes – about six to the inch – through both top and bottom leather, and also through the little fillet of leather slipped underneath, which you will see shown by the dotted line in the diagram. This is inserted to prevent the blade cutting the stitches. Now sew it firmly round, using two needles and strong wax-end, and when you have sewn right round the edge cut off the surplus leather to shape. Then you can deal with the flap. Punch four holes as shown by the black dots (diagram B) and cut two slits as illustrated. This flap is then folded back and the bottom of the sheath pushed through the slits, and that’s about all, though you can put in a few rivets if you like to make assurance doubly sure. Put the knife in and leave the sheath to dry, after which you can go round the cut edges with a bit of glass paper on a wooden block just to put a finish on, and you might try your hand at embossing or some other form of decoration to make it look really beautiful, as in the drawing, but no fringes please. The advantage of this sheath is that no retaining strap is needed to keep the knife from falling out. The sheath coming right up over the haft keeps the knife quite secure.

Retrieved from "http://en.scoutwiki.org/index.php?title=Spare_Time_Activities/A_knife_sheath&oldid=31459"
Category:
Cookies help us deliver our services. By using our services, you agree to our use of cookies.