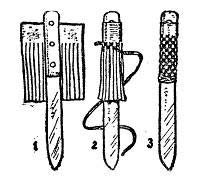 SOMEONE said the other day that we ought to be able to get a real backwoods type of hunting knife without paying such a lot of money, so I propose to show you how to convert an ordinary butcher’s knife, or even old table- knife, into a really serviceable and “woodcrafty” hunting knife. You can buy quite a useful knife about 8 in. long, with a plain wooden handle, for about two shillings at any tool shop where they sell butcher’s or bootmaker’s knives. Knives of this type are really much better for Scout use than the more expensive hunting knife, because they have thinner blades, which make them much better for cutting up meat and bread, which is their principal camp use. We don’t often need them here in England for skinning moose or grizzly bears, which is what those beautiful hunting knives are intended for. But that is all by the way. Let’s get back to the job. Having bought your knife, the first thing to do is to cover the handle.

A piece of leather is cut as long as the handle of the knife and just wide enough to go round it. Cut this into strips , leaving a band at the top about half an inch wide, as you see in the first sketch. Wet the leather and stretch it round the top of the handle, stitching the edges where they meet. Now take a long strip of leather, fix one end to the handle by means of a brad, and after a good soaking in water commence to plait the strap in and out as you see in the second illustration. The third sketch shows the handle complete with the plaited covering, and finished off with a Turk’s Head. Cut a piece of leather as long as the handle, and wide enough to go just round it. Cut it longitudinally (good word that – it means from top to bottom) into strips a ¼ in, wide. You don’t, however, start cutting at the top, but leave a band of uncut leather across the top about ½ in. wide (fig. 1). Wet the leather, stretch it tightly round the top of the handle and stitch the edges together where they meet. You now have the leather firmly attached to the handle at the top, and the strips hanging down all round.

Take a long strip of leather – a couple of bootlaces joined neatly together with a rawhide splice, which I have told you how to do several times, would do very well. Fix one end of this strip to the handle by means of a little brad close up to the top under one of the strips, and having got the whole nicely soaked in water and workable, start to plait the long strip in and out, alternately over one and under one of the longitudinal strips. Sketch 2 will make this clear. Pull tight, and work up close every time round, and you will soon have the handle covered with a closely woven basket-work of leather. Gently hammer it all flat, and make fast by binding round the bottom of the handle with a turn or two of wire, which is then covered by another band of leather sewn round, or by a Turk’s Head made of bootlace (fig. 3). For the sheath you could make the one described in Chapter II, or simpler, try your hand at this one, which is much easier to make. Take two strips of leather about 3 in. wide, one piece 1 in. or so shorter than your knife, for the front of the sheath, the other about 4 in. er long to form the back. Then back the top 3 in. of this longer piece and sew it securely across the back, using two needles and waxed thread; this forms the belt loop. Now make a flat wooden knife the same shape as the knife for which the sheath is being made, lay it on the back piece of leather, wet on the knife. Then take an old toothbrush handle, and shape the front of your sheath down over the wooden knife by rubbing hard all round the edges. This will leave a mark where the edge of the blade will come in the sheath. Cut away all surplus leather with a sharp knife ¼ in. away from this mark all round. You can now sew the sheath together with a needle, thread and awl; or a much easier way is to punch holes, about four to the inch, all round the sheath, and just lace it tightly with a flat leather bootlace. This looks very well. There is just one other thing to remember – that is either to put in a few copper rivets to prevent the knife cutting through the bootlace, or to insert a strip of leather right down the side between the front and back of the sheath. The artist has left the sheath plain, showing you the simplest possible knife sheath, but you can emboss it or ornament it in any way you like, of course. Last of all, remember it is no use having a swanky-looking knife if it isn’t in really good cutting condition. The Chief Scout says: “A Scout does not carry a knife, but a sharp knife.”

Retrieved from "http://en.scoutwiki.org/index.php?title=Spare_Time_Activities/A_real_sheath_knife&oldid=31480"
Category:
Cookies help us deliver our services. By using our services, you agree to our use of cookies.