Scouting and Guiding in Ukraine 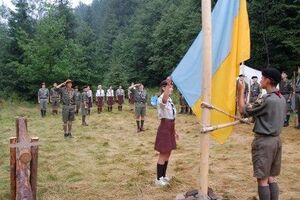 Scouting in Ukraine received World Organization of the Scout Movement (WOSM) recognition in July 2008. The Eurasian Region headquarters is located on Ukrainian territory.

A Ukrainian who attributes themselves to the СУМ organization is named Sumivets.

The Ukrainian noun for a single Scout is Skaut or Plastun. Plast was founded by Oleksander Tysovsky in 1911. 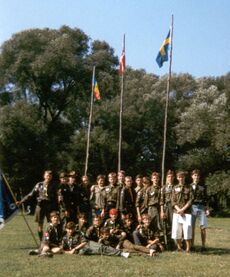 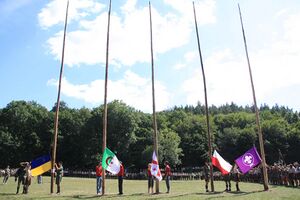 The First Ukrainian Scout Jamboree (Template:Lang-uk) was held from August 15-25, 1996 near Nevytsky Castle in Zakarpattia Oblast. It was organized by the Lisovi Chorty, a service fraternity within Plast . More than 700 plastuns from Ukraine, Slovakia, Poland, USA, Canada, Germany and Scouts and Guides from other Ukrainian Scout organizations as well as international guests from Sweden, Moldova, Denmark, France and Poland took part.

The Second Ukrainian Scout Jamboree (Template:Lang-uk), concerning the 20th anniversary of Plast and Scouting renewal in Ukraine, took place in the valley of Dzhurynskyy waterfall, Zalishchynskyy district, Ternopil Oblast near Czerwonogród castle. More than 1300 plastuns and Ukrainian scouts from all regions of Ukraine and from USA, Germany, Estonia and Belgium were registered at Jamboree. Among Ukrainian participants of Jamboree, there were scouts from Algeria, Georgia and Poland. [1]

In addition, there are Girl Scouts of the USA Overseas in Kiev, serviced by way of USAGSO headquarters in New York; as well as Cub Scout Pack 3980 and Boy Scout Troop 980, both of Kiev, linked to the Direct Service branch of the Boy Scouts of America, which supports units around the world. Finally, Russian emigré Scout organizations, generally aligned to either NORS or ORYuR but not connected with RAS/N, have independent branches in Ukraine.

Retrieved from "http://en.scoutwiki.org/index.php?title=Scouting_and_Guiding_in_Ukraine&oldid=49861"
Categories:
Cookies help us deliver our services. By using our services, you agree to our use of cookies.