The first Scouting activity in Hungary was the raft trip on the river Vág in 1908.[4][5]:17 In 1909 Hungarian newspapers reported about Scouting in England, and some chapters of Scouting for Boys were published as well. István Kanitz bought Baden-Powell's book Scouting for Boys and started the first unofficial Scout troop with friends. The first official troops were founded in 1910[6] in schools and Christian youth associations. The first Scout troops in the dual monarchy, the troops at the Piarist High School, Calvinist Youth Club and Regnum Marianum, were founded in Budapest in 1910.[4][7]:10 In 1912 the Hungarian Scout Association (Magyar Cserkész Örszem Szöveség) was founded.[5]:18[6][7]:9–10

Important Scouting pioneers in Hungary were Sándor Sík,[8]:23 László Králik,[8]:21 Fritz de Molnar and Aladar de Szillassy.[8]:22 Fritz de Molnar brought a copy of Scouting for Boys from Sweden to Hungary and started Scouting in the Piarist College.[9]:80 Fritz de Molnar later became the Hungarian International Commissioner[9]:43 and Deputy Camp Chief.[9]:81[10][11] He was the man who won the heart of Count Pál Teleki for Scouting.[9]:81–82 Aladar de Szillassy, a teacher and member of the YMCA in Budapest, started a translation of Scouting for Boys[7]:9 and with the support of the National Secretary of the Hungarian YMCA, he started Scouting as part of the YMCA in Budapest.[9]:80–81 The Piarist Priest Sík Sándor finished the translation of Scouting for Boys.[8]:23

During World War I Hungarian Scouts cared for the wounded.[7]:21 After World War I Scout groups were founded in many schools and the first student Scouting groups appeared.[4] Troops were also founded in factories.[4] In 1920, the first Hungarian Scouting magazine Cserkész ("Hungarian Scout") was published. In 1922 Teleki Pál, a prominent man was elected as Chief Scout and later served as Honorary Chief Scout.[12]:248[13]:131 Air Scouts were introduced in Hungary and a National Scout Brass Band was founded.[12]:248 The first Woodbadge Course in Hungary was held in 1924. In 1926 a Sea Scout Training Center on the Danube and the Scout Training Center Hárshegy for Woodbadge trainings were opened.[12]:248

Hungarian Scouts continued their involvement internationally. When the World Scout Bureau was formed in 1922, Hungary was among its founders.[6] Hungary not only helped found the World Association of Girl Guides and Girl Scouts (WAGGGS) in 1928,[6] but also served as its original base, in Parád.[12]:250–251 Hungarian Scouts were active at the 1924 World Scout Jamboree. Hungarian Scouts placed third in the national competition, behind the Scouts of Britain and America.[9]:31[14]

Hungary held its first National Jamboree in 1926 in Káposztásmegyer[4] with 10.000 participants.[6] The camp took place from July 9 to 23, 1926, and it was the only one between the two wars.[13]:134 In 1928 Baden-Powell visited Hungary.[13]:134–135 A few years later, Boy Scouts from all over the world gathered at the Fourth World Jamboree, held at Gödöllő, Hungary from August 2–13, 1933. Forty-six nations and territories were represented by 25,792 Scouts. They encamped around the Royal Palace in the Royal Forest of Gödöllő, about 11 miles from the capital of Budapest.

The badge of the 4th World Scout Jamboree depicted the white stag of Hungarian mythology, the national symbol of Hungary and the official badge of the Jamboree.

Former Prime Minister Teleki Pál served as camp chief and Vitez Kisbarnaki Ferenc Farkas, a general staff officer of the Hungarian Royal Army, served as the General Camp Manager.[9]:43[14][15] The 4th World Jamboree was the first time there was a subcamp for Scouts taking part in aviation.[14][16]:142

During World War II, Hungarian Scouts carried out many important roles, acting as messengers and other essential duties. Pál Teleki was called on once again to lead the nation as Prime Minister and Chief Scout of Hungary. Betrayed in his efforts to keep Hungary out of World War II, he committed suicide on April 3, 1941. He was succeeded as Chief Scout by General Kisbarnaki Ferenc Farkas, Commander of Royal Ludvokia Akademia. General Farkas remained Chief Scout of the Hungarian Scouts in Exile.

Under political pressure from the extreme right, the Hungarian Scouting movement became more militaristic and nationalistic between 1941 and 1945. Despite the war, the Hungarian national Scout leadership was able until the end of 1943 to maintain contact with the Boy Scouts International Bureau, the Polish Scout Headquarters in exile, and with Prince Gustav Adolf of Sweden, Chief Scout of Sweden and member of the World Scout Committee.[12]:260 Before the end of World War II, the national Hungarian Scouts were ordered to merge with the extremist right-leaning youth organization Hungarista Örszem, but it was never really executed.[12]:260–262[17]

In 1948, Scouting was officially abolished in Hungary by the Communist regime,[6][12]:267–269 but it remained nascent underground in a situation similar to that in neighboring Czechoslovakia.[12]:272[18]:229–231 Former Scouts worked in secret to keep "the spirit of Scouting" alive during this time even at risk of imprisonment.[4][12]:65–66[14] During the Hungarian Revolution of 1956 there was a short time were Hungarian Scouts were active in public again.[12]:272 After the end of the Hungarian Revolution, Scout groups were founded in refugee camps and Austrian cities.[20] In 1957 there were 11 groups with 450 Scouts registered within Pfadfinder Österreichs.[20][21] Hungarian Scouts took part in the JIM 1957 as members of the Austrian contingent[20][22] and in the sub camp of the Council of Scout associations in Exile.[12]:55–56[23]

In 1993 an international Camp at Gödöllő took place commemorating the 4th World Scout Jamboree. There was a sub camp for members of International Fellowship of Former Scouts and Guides. Betty Clay, Baden-Powell's daughter, took part in this international Camp.[12]:300 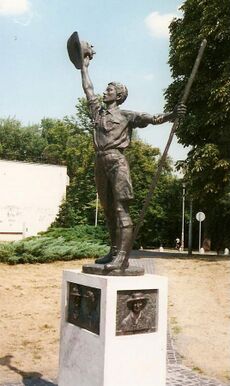 Statue of The Boy Scout erected in Gödöllő, Hungary to commemorate the tenth anniversary of the 1933 World Jamboree.

In 1994, after democracy and Scouting was reestablished in Hungary, the community around Gödöllő moved to locate and re-erect a statue by Lőrinc Siklódi commemorating the 1933 World Jamboree. In 1943, on the tenth anniversary of the Jamboree, a statue of a Boy Scout was erected across from the Guard Barracks in Royal Forest of Gödöllő, Hungary. When Communist forces liberated the country from Nazi Germany, the original statue by sculptor Lőrinc Siklódi was removed as the government moved to suppress Scouting.

After a long search, the original statue could not be found, and a committee was established with the purpose of erecting a new statue. They decided to enlarge Zsigmond Kisfaludi Strobl's 50 inches (130 cm) statuette entitled The Boy Scout. A student of Kisfaludi Strobl, István Pál, was chosen to complete the work. The new statue of a Boy Scout standing on the original pedestal is unveiled on April 23, 1994, commemorating yet again the 1933 World Jamboree.[26]

With the growth of Scouting in Hungary, changes to the organization include girl membership, who have their own patrols, and the expansion from towns into villages, allowing otherwise isolated children to participate.[14] Prior to World War II, Magyar Cserkészszövetség groups were primarily hosted by schools, and today are more likely to be connected to a church parish.[14][30] During the Communist period, Magyar Cserkészszövetség lost considerable property, but today owns two campsites near Budapest.[28]:4 These are the Sztrilich Pál Cserkészpark[31] and the Csobánkai Közép-európai Cserkészpark.[32]

The program is currently organized into three age groups:

The Scout Motto is Légy Résen, translating as Be Prepared in Hungarian. The noun for a single Scout in Hungarian is Cserkész. The membership badge of Magyar Cserkészszövetség features the Crown of Saint Stephen. There is also a Sea Scout programme.

A number of associations offers Scouting to people of Hungarian descent living outside of Hungary. They form two groups:

Retrieved from "http://en.scoutwiki.org/index.php?title=Magyar_Cserkészszövetség&oldid=49829"
Categories:
Cookies help us deliver our services. By using our services, you agree to our use of cookies.