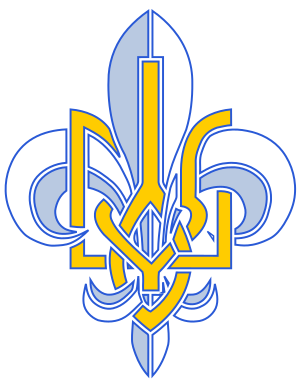 Plast was founded in Ukraine in 1911 as the Ukrainian Scout Organization. Ukrainian Scouting has been known since its inception as "Plast". In Ukrainian a plastun is an historical name for a Cossack scout and sentry serviceman. The founder of Ukrainian Scouting, Dr. Oleksander Tysovsky (alternately Oleksandr Tysowskyj), affectionately known as "Drot," adapted the universal Scout principles to the needs and interests of Ukrainian youth.

Born during great social and political upheavals in Europe, Ukrainian Plast came into being to fulfill specific national aims, unlike other Scout organizations. The first Scout troops were formed in L'viv in 1911, then a part of the Austro-Hungarian Empire by Petro Franko and Ivan Chmola. The official date of the founding of Plast is generally deemed to be April 12 1912, at the L'viv Academic Gymnasium by Dr. Oleksander Tysovsky.

Scouting spread rapidly to the other cities and towns, and by 1913 the first Supreme Scout Council had been formed and the first handbook published. The same year, the Orhanizatsiyniy Plast Komitet was formed in Lviv by Plast groups from different regions, and the first hiking camp was organized.

By 1916 its membership exceeded 10,000, and it was a fully developed and functioning organization, consisting of separate branches of Boy Scouts and Girl Guides. Ukrainian Plast held regular camps for Cubs, Scouts and Rovers, training courses for leaders, and produced a variety of Scout publications, including a Ukrainian translation of 'Scouting for Boys'.

Shortly after its founding, World War I brought about the collapse of the two powers occupying ethnic Ukrainian territory, Austria-Hungary and tsarist Russia, and the formation of the Ukrainian National Republic in 1918. The subsequent years witnessed a great upswing in Scouting, as it spread into the towns and communities where it had been previously unknown, mainly in the newly freed central provinces of Ukraine. Hundreds, if not thousands, of boys, inspired by the ideals of service to God and Country which Scouting engenders, volunteered to join the armed forces, fighting on several fronts, and many gave their lives.

The occupation of central Ukraine by the Red Army in 1922 led to an immediate abolition of all Scout activities in this region. In the Romanian area of Bukovina, the development of Plast was likewise hampered. Ukrainian Scouting was among the first to suffer what later became the fate of many Scout Associations throughout the world. In areas later to become western Ukraine, which included parts of Czechoslovakia and Poland, the Scout movement emerged from the ruins of war with renewed vitality. During this period, Ukrainian Scouting first requested international recognition, but was denied on political grounds.

In spite of numerous obstacles, Plast developed rapidly in the Polish areas, with high levels of membership among students, farmers and workers. A key sponsor was Metropolitan Andriy Sheptytsky, the Archbishop of the Ukrainian Greek Catholic Church (1901-1944), who donated a campsite called "Sokil" in the Carpathian Mountains. A number of publications are introduced, including the official organ Molode Zhyttia and Dr. Oleksander Tysovsky's seminal handbook, Zhyttia v Plasti.

In the late 1920s, external pressure on the part of the Polish authorities seriously impaired further growth of Plast on its territory, and eventually led to an outright abolition of Ukrainian Scouting in 1928 in the Volyn region, and in Halychyna in 1930. However, Plast continued to flourish in Carpathian Ruthenia, the ethnic Ukrainian area within Czechoslovakia, and maintained a close liaison with the underground Scout units in parts of central Ukraine under the Soviet Union until World War II. Ukrainian Scouts took part in the World Jamboree at Arrowe Park in 1929, and as part of the Czechoslovak contingent in the fourth World Jamboree at Gödöllő in 1933, attempting to make the World Scouting aware of the suppression of free Scout activities in Ukraine.

In Western Ukraine, Plast, though banned, continues to operate illegally and conspirationally under the auspices of the Plast Center. Plast activities continue to be undertaken, but via the Commission of Educational Campsites, the "Ridna Shkola" and published in the journal Vohni.

The Polish leadership pursues this activity and punishes such activities with arrests and internment in concentration camps.

By 1939, World War II breaks out and membership in Plast sees a resurgence in western Ukraine, although the occupying German forces again ban Plast, yet activity continues. As in the previous war, many plastuny take up arms in various armies that traverse western and eastern Ukraine during the war.

During the years under Communism and the Soviet Union, Scouting was banned in Ukraine, but the Plast organization continued to exist in exile around the world.

Ukrainian Scouting was hampered by World War II, but Plast managed to survive the war and began to flourish again in the refugee camps under the occupation of the Western Powers. The successful commemoration of the 35th Anniversary of the Movement in 1947 was the highlight of Plast activities at that time. Multiple groups of plastuny met at the Holovna Plastova Rada in Munich.

Ukrainian Scouting became a member of the Displaced Persons Division of the Boy Scouts International Bureau. A delegation of over 40 Scouts and Scouters participated in the sixth World Scout Jamboree at Moisson in 1947 and a smaller group in the seventh World Jamboree at Bad Ischl in 1951.

After the mass resettlement of Ukrainians between 1948 and 1950, Plast was reorganized and branches permanently established in a number of western countries with large Ukrainian communities, such as the United States, Canada, Australia, France, Austria, the United Kingdom, Germany and Argentina, where it continues to flourish and expand.

In the summer of 1962, Ukrainian Scouting celebrated its 50th Anniversary with a National Jamboree on its own permanent campsite ("Vovcha Tropa") at East Chatham, New York, in which over 2,000 members, as well as Scouts of other national associations participated. Subsequent anniversaries were celebrated in 1972 (again in East Chatham, New York), 1978 (Alberta, Canada) and every five years thereafter.

The location of Plast's global headquarters would vary based on the leadership elected at each Holovna Plastova Rada, although the centers of administration tended to be New York City and Toronto, Canada.

Plast was quite active in publishing, with the key publications:

And numerous local, regional and fraternal bulletins, publications, journals and handbooks, many of which were published by Plast Publishing.

In addition to creating over a dozen campsites, Plast members built or acquired over 30 facilities or domivky where they could hold activities, generally on a weekly basis. Several stores, including Molode Zhyttia in New York City, provided uniforms, emblems, publications and other goods. Several foundations and organizations provided and continue to provide support.

When the Soviet Union began to crumble, Scouting appeared clandestinely. The first Plast camp was organized in the summer of 1989 and was raided by the Soviet secret police (KGB); several Scouts were beaten and arrested. Nevertheless, Scouting and Plast persisted.

Since the end of Soviet communism and the birth of an independent Ukraine in 1991, Ukrainian Plast Scouting has been growing rapidly in every corner of the country. This included units in Kiev, Lutsk and Donetsk. The most active region, however, was in Lviv, where on 22 February 1990, the town council enacted the Statut Plastovoho Tovarystva.

In August 1997, Plast Ukrainian Scouting celebrated the 85th anniversary since the first Scouting units appeared in Ukraine in 1911, with a Plast Jamboree at the renamed Sokil Plast Museum-Camp, attended by 700 Scouts from 34 units throughout Ukraine. Highlights of this Jamboree included the inauguration the third Nachalniy Plastun (Chief Scout) in Plast's history, and the first ever inaugurated in Ukraine, Dr. Lubomyr Romankiw on August 10, 1997; the opening of the Museum at this historic campsite, donated by Metropolitan Andrey Sheptytsky, which had been used by Plast from 1924-1944; and the attendance of several scouts from the First Phase of Ukrainian Scouting, including the 93-year-old composer Mykola Kolessa.

In addition, other Scouting groups have been spontaneously appearing, mostly in the eastern and southern parts of Ukraine. Most of them participated, together with Plast, in the Ukrainian delegation to the 18th World Scout Jamboree in the Netherlands in 1995, as well as the First All-Ukrainian Scout Jamboree in Nevytske, and the Second Slavic Jamboree in Prague, Czech Republic.

Plast Publishing largely moved back to Ukraine, with financial and editorial support from international units, and publishes a magazine for both younger Scouts, Hotuys (Be Prepared), and for older Scouts Yunak ... as with all Plast publications, these monthly publications are written in Ukrainian. They are also distributed internationally.

Plast is working with the various other Ukrainian Scouting organizations to develop a national Scouting federation and to achieve recognition by the WOSM. All duties in Ukrainian Scouting, from local to the National Council levels, are performed by a combination volunteer workers and paid professionals.

The 95th anniversary jubilee is planned for 2007, with a Zustrich at the Plastova Sich campsite in Grafton, Ontario, Canada.

Plast outside of Ukraine

After World War II, a number of independent Plast Ukrainian Scouting organizations were founded in the West by Ukrainians from Western Ukraine (which was under Polish rule until 1939). This phase of Plast began in Germany in 1945 in various Displaced Persons Camps, and as various members of Plast eventually ended up in Canada, the United States, the UK, Australia and elsewhere, various émigré organizations were founded between 1946 and 1951. Until the fall of the Soviet Union, these represented the totality of Plast organizations, and were aligned to a supranational organization called KUPO (Conference of Ukrainian Plast Organizations), which convened every four years and elected an operational "Holovna Plastova Starshyna" (HPB) and a board called "Holovna Plastova Rada" (HPR), and would also name the head Plastun ("Nachalniy Plastun"), typically a long-term or lifetime, and somewhat ceremonial position. The current, and third, "Nachalniy Plastun" is US-based (originally from Edmonton, Alberta, Canada) Dr. Lubomyr Romankiw, his predecessor was US-based Dr. Yuriy Starosols'kiy, who succeeded Severyn Levytsky ("Siriy Lev"), who was inaugurated in post-World War II Germany.

Thus, Plast has existed as an emigré organization in:

To a less-organized extent:

The mission of Plast in exile was amended somewhat, with objectives to maintain and perpetuate Plast and Ukrainian culture and identity throughout the Ukrainian diaspora.

After the fall of the Soviet Union, in addition to Ukraine, Plast units were formed in Poland and Czech Republics. In the Summer of 1997, a two-week Jamboree was held in Winnipeg, Canada that brought Plast contingents from France, Germany, Argentina, the United States, Canada, Ukraine, and other countries. Given that only the organization in Ukraine is a "National" organization, the other Plast units ("krayi") continue to collaborate via KUPO and HPB (now moved to Ukraine), but with Plast in Ukraine having its own status.

(age ranges vary depending on the region around the world)

The Plast Scout Motto is SKOB!, an acronym for Syl'no! Krasno! Oberezhno! Bystro! meaning "Strongly! Beautifully! Carefully! Speedily!" in Ukrainian. The Scout Motto for the younger Ukrainian Scouts is Hotuis! or "Prepare yourself!"

The Ukrainian noun for a single Scout is Plastun.

The word plastun means "a Plast Scout" (male). A female Plast Scout is a plastunka ... The Plast Law (Plastoviy Zakon), more accurately a Plast Scout's Law, is as follows.

On my honor I swear that I will do everything in my power to: Be true to God and Ukraine, To help others, To obey Plast leadership and To live according to the Plast Law.

Retrieved from "http://en.scoutwiki.org/index.php?title=Plast&oldid=35968"
Categories:
Cookies help us deliver our services. By using our services, you agree to our use of cookies.