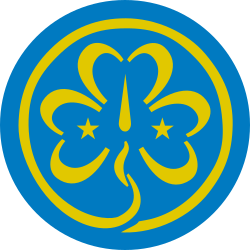 Logo of the WAGGGS

The World Association of Girl Guides and Girl Scouts is a global association supporting the female-oriented and female-only Scouting organizations in 144 countries. It was established in 1928 and has its headquarters in London, England. It is the counterpart of the World Organization of the Scout Movement (WOSM).

WAGGGS provides a high quality non-formal educational program that provides dynamic, flexible and values-based training in life skills, leadership and decision making. It also offers projects and programs at an international level that enable Girl Guides and Girl Scouts to be responsible world citizens through action and activity in the community.

Girl Guiding/Girl Scouting is open to all girls and young women without distinction of creed, race, nationality, or any other circumstance. The World Association of Girl Guides and Girl Scouts believes that the education of girls, as well as the education of boys, includes education for equal partnership. Young men and young women are taught to recognize their differences and their similarities, and to respect each other as individuals.

Girl Guiding/Girl Scouting is based on a core set of values that are found in the Girl Guide/Girl Scout Promise and Law. Each Girl Guide and Girl Scout promises to do her best to her faith and to others, and in so doing she realizes her fullest potential as a responsible citizen.

Each Guide/Girl Scout defines her own progress and development according to her needs and aspirations within the framework program provided. This contrasts with many formal education systems where young people must fit themselves into a rigid structure with little recognition of individual needs and differences. The Girl Guide/Girl Scout method is the specific way that the leadership works with girls and young women to achieve the mission of WAGGGS. It is an integrated approach with certain key elements: The Girl Guiding/Girl Scouting method can be used equally effectively with girls of all ages, abilities and backgrounds. In his book "Girl Guiding," Lord Baden-Powell (1918) wrote:

In 1965, Dame Leslie Whateley of the then-Girl Guides World Bureau was awarded the Bronze Wolf, the only distinction of the World Organization of the Scout Movement, awarded by the World Scout Committee for exceptional services to world Scouting.

Girl Guides were formed in 1910 by Robert Baden-Powell, with the assistance of his sister Agnes Baden-Powell. After his marriage in 1912, his wife Olave Baden-Powell took a leading role in the development of Girl Guiding and Girl Scouting.

The member organizations continue to meet every three years (initially every two years) at World Conferences.[1]

WAGGGS consists of national Member Organizations who are run independently but agree to abide by the WAGGGS constitution. The national Member Organizations are split into five regions. The member organizations in turn elect the World Board, originally the World Committee, which governs the World Association of Girl Guides and Girl Scouts. It is made up of 17 active volunteer members from around the world who are democratically elected by all Member Organizations and include the Chairs from each of the five WAGGGS regions. In addition there is the permanent staff of the World Bureau based in London and headed by the WAGGGS Chief Executive (formerly Director of the World Bureau). Every three years representatives from the member states meet in a World Conference to discuss and vote on policy.

Each WAGGGS Member Organization chooses how it believes it can best promote these goals, taking into account its culture and the needs of its young people. Some choose to work with girls alone in a single sex environment in order to break down stereotypes and to give girls and young women the confidence to take their place in society. Other Member Organizations prefer to work with mixed groups to enable young women and young men equal partnership within their units. Some Organizations choose to mix co-educational and single sex approaches according the age and the preferences of the young people.

File:WAGGGSMap-World.png
map of WAGGGS regional Girl Guide and Girl Scout divisions; grey areas such as Laos and Cuba have no Scouting

The World Association of Girl Guides and Girl Scouts has offices in five regional divisions:

WAGGGS operates four World Centers that offer training programs, activities and lodging for girls and leaders, as well as members of some other groups and independent travelers. Activities are primarily focused on international friendship and cooperation, personal development and leadership training, enjoyment and service. The Friends of the Four World Centres organisation supports and promotes the centres.

The four World Centers are:

The symbolism of the WAGGGS World trefoil: The three leaves represent the three duties and the three parts of the promise, the two five point-stars stand for the promise and the law and the vein in the centre represents the compass needle showing the right way. The base of the trefoil stands for the flame of the love of humanity and the colours blue and gold represent the sun shining over all children on the world.[3]

Retrieved from "http://en.scoutwiki.org/index.php?title=World_Association_of_Girl_Guides_and_Girl_Scouts&oldid=50143"
Categories:
Cookies help us deliver our services. By using our services, you agree to our use of cookies.