The Australian Scout Jamboree is a jamboree which is held every three years by Scouts Australia. The Jamboree is traditionally held in early January and runs for 12-13 days.

The first, in 1934, was held in Frankston, Victoria and was the only Australian Jamboree attended by the Chief Scout, Robert Baden-Powell. The Frankston district still uses the original Jamboree logo as its district emblem.

Traditionally Australian Jamborees are hosted on a rotational basis, with the order of hosting being as follows:

Each Scouting Branch (State) is the effective host of the Australian Jamboree and takes responsibility for its management.

By world standards, Australian Jamborees are medium sized, with the largest Jamborees being held in Europe and North America and generally hosting between 35,000 to 40,000 participants.

The Jamboree Organising Committee (JOC) has the primary task of organising and running the Jamboree. The host state takes the responsibility for forming a JOC from local scouters.

The largest Organisational unit of the Jamboree is a Contingent. There is one contingent for each of the Australian States and Territories - Australian Capital Territory, New South Wales, Northern Territory, Queensland, South Australia, Tasmania, Victoria, Western Australia, - as well as New Zealand, Guides Australia, and International Contingents.

A troop consists of about 42 Scouts. Six Patrols of Youth members and six to seven Leaders. Each troop shares a common camping area where they will cook, sleep and socialise for the duration of the Jamboree. Troops are generally made up of members of the same contingent and Mixed Overseas contingent.

Youth members in troops are further subdivided into patrols of 5 - 6 scouts. The most experienced scout is (generally) given the task of being 'Patrol Leader' or 'PL', and another experienced scout is assigned as 'Assistant Patrol Leader' or 'APL'. Scouts work in patrols for all activities and tasks during the Jamboree. at the jamboree Patrol Leaders are given special prizes so to speak to congradulate them on their hard and important task ahead. Thay are also given a special lunch.

Scouts must be between the age of 11 and 15 and must have proven their scouting skills by earning their Pioneer Badge. Participants will be expected to cook for themselves, keep their sleeping area and campsite clean and tidy, participate in their assigned activities, and cope with the experience of being away from home for the period of the Jamboree (usually about 11 days).

Older members - namely Venturers and Rovers - also attend the Jamboree to assist with activities and other tasks.

Younger members - Joeys, Cubs - families, and friends of Scouting are able to visit the site as day visitors, especially on Future Scout Day (Market Day), where games and stalls are set up by the Scouts attending the Jamboree.

Jamboree activities are a mixture of on-site and off-site activities that seek to challenge the participants, reinforce Scouting values, provide valuable and new experiences, and most of all, be great fun.

Jamborees were not held during World War II 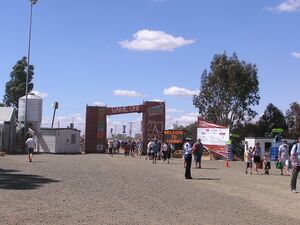 The 21st Australian Jamboree (AJ2007) took place at the Elmore Field Days site in Elmore, Victoria, from the 1st to the 13th of January, 2007. [3] It was the first major Scout event in 2007 and thus the first to celebrate 100 years of Scouting. 12,000 adults and youth from Australia and 30 other counties attended the Jamboree, 8,500 of whom were scouts. [4] The Jamboree had a theme of "Get in the Game" to promote participation.

There was also lots of entertainment at the AJ2007 main arena with Rogue Traders, Evermore, Bjorn Again, Tripod and Taxiride performing on different nights. Also Acid Eyeliner (Greenday Tribute band), Area 7 and a Robbie Williams tribute band. Also, there was an extreme night with Motocross riders and a stunt plane. The Place was a Marquee with themed disco's every night. The Beach Hut was a stage set up near the Mall that held concerts every night.

Clean up of the site involved removing 200 tonnes of rubbish, dismantling 16,000 square meters of marquee, and removing 208 portable buildings on site, including toilets. It was expected to take a fortnight using 50 volunteers.[5] The scouts had already taken down their own tents and troop facilities.

Retrieved from "http://en.scoutwiki.org/index.php?title=Australian_Scout_Jamboree&oldid=49782"
Categories:
Cookies help us deliver our services. By using our services, you agree to our use of cookies.