Scouts is the section of Scouts Australia for boys and girls aged 10.5 - 15, although they can move up to the Venturer Scouts section from the age of 14.5. It follows the Cub Scout section. Scouts belong to patrols, headed by a youth leader as Patrol Leader, with an Assistant Patrol Leader. Patrols are grouped into a Scout Troop. The adult leaders or Scouters are a Scout Leader (SL) and one or more Assistant Scout Leaders (ASL). The troop is managed by the Troop Council, which consists of the Patrol Leaders advised by the Scout Leader. Scouts was the first section of the Scout Movement to be founded.

Scouts make the Scout Promise which can be either of two forms:-

On my honour
I promise that I will do my best
To do my duty to my God and
To the Queen of Australia,
To help other people, and
To live by the Scout Law


On my honour
I promise that I will do my best
To do my duty to my God, and
To Australia
To help other people, and
To the live by the Scout Law


The difference reflects the difference in Australian society between those who support the Monarchy and those who would prefer that the country became a Republic. Also note that the promise is made "To my god", highlighting the fact that Australian scouting is multi-national, and also "multi-religious".

The Scout Law is:- 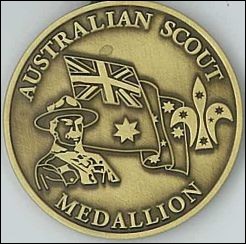 The scout award scheme is set to provide character development and leadership, while at the same time providing an opportunity for fun activities such as hiking, abseiling and camping. It provides activities ranging from land and sea to air. A Scout works to gain a number of proficiency badges (which involve the Scout gaining skills in a specified area ranging from Information Technology to Navigation, caving and rock climbing to arts and communication) and target badges/cords. These are ranked in order of difficulty - Pioneer (Red)which provides learning opportunities, Explorer (Blue)provides showing skills and leadership and finally Adventurer (Green)which is teaching others. When a Scout has achieved the Red cord, they may attend a special scouting leadership course. This, along with the Green cord and a major leadership project, allows a scout to attain the Australian Scout Medallion, the highest award in the scout section. This can be compared to the Queen's Scout badge for Venturers.

To earn the Australian Scout Medallion, around 14 years of age, the Scout must complete the Adventurer Level Cord, including organising one of the following events that will run for 2 nights: 30km hike, 45km canoe expedition (50 percent increase) or a 120km bike ride (400 percent increase). The scout must also complete at least 10 hours of community service. The Scout must also be of good character, have attended a Scout leadership course and undertake a leadership project, and a report on this. The Scout will then be presented with the Australian Scout Medallion, a badge to put on the scouts uniform for Venturer and Rover Scouts, and the Scout is give a certificate by the Governor of their State.[3]

Retrieved from "http://en.scoutwiki.org/index.php?title=Scouts_(Australia)&oldid=37976"
Categories:
Cookies help us deliver our services. By using our services, you agree to our use of cookies.