Scouting in Victoria is a branch of Scouts Australia in the State of Victoria, Australia. It claims to have over 23,500 members, including 4,500 trained adult leaders.

Victoria hosted the Australian Scout Jamboree (AJ2007) from January 2-13, 2007 in Elmore, in regional Victoria. It was the first official worldwide Scouting event to celebrate the 100 years of Scouting.

The Victoria Branch is responsible for the Victorian Scout Heritage Centre, located at Como Avenue, South Yarra, Victoria, to preserve the history of the Scout Movement. It was started in the early 1970s when the Chief Commissioner appointed Ian Croll as archivist. The history page on the web site for the centre reports the following account of how Scouting started in Victoria.

"The cradle of Scouting in Victoria was the Tooronga Rd. State School, Caulfield; where in late 1907 one of the pupils, Roy McIndoe, received from a friend in England, who had been a member of the experimental camp at Brownsea Island, some pamphlets which had been issued by the Chief. These he showed to his mates who immediately got red shirts, their father's old felt hats, formed 'patrols' and 'whooped round the place like Red Indians'. Later in 1908 when they received the first copies of Scouting for Boys, they settled down to genuine Scouting."

The Boy Scouts Association, Victorian Branch was incorporated in 1932. [4]

Adult Leader Training takes place at Gilwell Park, named after the International Training Centre near London, United Kingdom. It is a 157 hectare camping property owned by the Branch and located near Gembrook, Victoria. It is also available for youth groups. It was first used in 1926.

The Branch is divided into 10 Regions:-

The Victorian Cuboree is held every three years at Gilwell Park during the easter school holidays.

Stradbroke Cup is a hike and camp event for the Scout Section, also held on the Easter long weekend, though it is held in various locations around the state, to allow the maximum number of participants to take part.

Hoadley Hide is one of the main events on the Venturer Scouts calendar. It is also a hike camp that is run annually on the Easter long weekend. Victorian Gathering is the main way for Venturers to end the year, held on the first weekend in December, it's location rotates every two years.

Surfmoot takes place on the Australia Day long weekend, and is the beginning to the Rover Year, a sun, sea and beach event held in Anglesea. It is the largest annual Rover event in Australia. Mudbash is the premier event of Rover Motorsport, taking place on the Queen's Birthday long weekend at Mafeking Rover Park. Non-rover visitors are welcome on the Sunday.

Gilwell Park is a campsite and activity centre for Scouting groups in Victoria. It is also a training and conference centre for Scout Leaders. The 157 acre property is located on both sides of the Launching Place Road in Gembrook.

Gilwell Park was named after the original Gilwell Park in London. In 1926, the first leader training course was held at what would become Gilwell Park, after it was soon donated to the Scout Association.

Robert Baden-Powell, founder of the Scouting Movement, approved the naming of the new Training Centre and visited it twice, in 1931 and again in 1935. One of the features of the park is the Chief's Gate, which was only opened for Baden-Powell, and after his death has been both welded and rusted closed. Other locations include The Gauntlet Commando course and the Lochaun, a lake that is famously freezing all year round - even in the depths of summer. The EM Derrick Pack Holiday Centre, a bunkhouse and hall/kitchen that is primarily used by Cub Packs for their Pack Holidays, as well as for training courses, and the Hoadley and deMolnar Training Areas are dedicated to Wood Badge Training, though like most buildings they are open for hiring.

Mafeking Rover Park is a campground which is fully owned and operated by the Victorian Branch Rover Council and was originally anticipated as a home for Victorian Rover Scout Motorsport. Located 32 km from Yea, it is a 130 Hectares mix of open land and scrub.[5]

Although it is called a Rover Park, its use is open to all sections of the Scouting Movement.

Mafeking was named after the South African town of Mafeking, which was besieged for 219 days during the Second Boer War. The Garrison was commanded by Robert Baden-Powell, who with 2,000 British soldiers held off 8,000 Boer Soldiers until relieved, catapulting Baden-Powell to the status of a national hero.

Mafeking's facilities include a 4-cargo-container-tall abseiling tower, commando, orienteering and 9-hole golf courses. Lake Surfmoot provides an area for canoeing, and there are numerous walking tracks. Accommodation is offered in a Scout Hall, Bunkhouses and on standard campsites. Mafeking also has numerous motorsport related facilities with well maintained tracks that are set up to the requirements of the Confederation of Australian Motorsport.

Mafeking is home to a large variety of Australian fauna and flora, such as Kangaroos, Koalas, Swap Wallabys, Possums, Bats, as well as a multitude of lizards, Frogs, Birds and Fish. Local indigenous plants are used at Mafeking, both from propagated species collected from the local area, and through revegetation efforts. 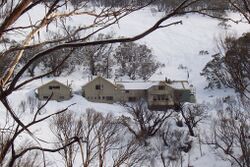 The Alpine Rover Crew was formed in 1940 by W.F. "Bill" Waters, Branch Commissioner - Rovers during 1930 - 1965, to promote the Bogong Rover Chalet. All invested Rover or Leaders, who have completed a Bogong Winter Party, become a member during their first winter party. The Alpine Venturer Unit was formed in 2000, mostly by the hard work of Matt & Ian Franzke. It is used as many Venturers visit the chalet but cannot be invested into a Rover Crew.

Before 1940 and the birth of the Alpine Rover Crew, the Bogong Rover Crew carried out the same purpose. However since then, membership has become an award for services to Alpine Rovering. Members have displayed the ideals of Rovering and are dedicated in their service to others. Roughly 200 members have since been invested, in a ceremony that traditionally takes place on skis in sight of Mount Bogong.

Retrieved from "http://en.scoutwiki.org/index.php?title=Scouting_in_Victoria&oldid=26568"
Categories:
Cookies help us deliver our services. By using our services, you agree to our use of cookies.