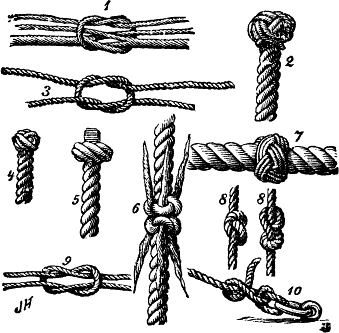 A knot is a method for fastening or securing linear material such as rope by tying or interweaving. It may consist of a length of one or more segments of rope, string, webbing, twine, strap or even chain interwoven so as to create in the line the ability to bind to itself or to some other object - the "load". Knots have been the subject of interest both for their ancient origins, common use, and the mathematical implications of knot theory.

There is a large variety of knots and each knot has specific properties and suitability for a range of tasks. Some knots are well-adapted to attach to particular objects such as another rope, cleat, ring, or stake. Other knots are made to bind or constrict around an object. Decorative knots usually bind to themselves to produce attractive patterns. Choosing the correct knot for the job at hand is one of the most fundamental aspects of using knots well.

The number of books, websites, videos, and other resources available to those interested in learning about knots is a testament to the value they hold for humankind. While some people possess an innate ability to look at a diagram or photo and tie the illustrated knot, for others the initial stages of learning are best accomplished by being shown knot tying methods by a person who already knows them. Knot tying skills are often transmitted by sailors, scouts, climbers, cavers, arborists, rescue professionals, fishermen, and surgeons. After mastering a few basic knots, the diagrams and photos become easier to interpret and use to continue the learning process. As more knots are learned, patterns begin to become evident in their structure and methods of tying. The learning of knots rewards practice and patience.

Knots are essential in many industrial, occupational, recreational, and domestic settings. Even simple activities such as running a load from the hardware store to home can result in disaster if a clumsy twist in a cord passes for a knot. Truckers needing to tie down a load may use a trucker's hitch, gaining mechanical advantage. Knots can save the spelunker from foolishly becoming buried under millions of tons of rock. Whatever the activity, such as sailing on the water or climbing on a cliff-side rock, learning well-tested knots prior to some hazardous activity introduces a critical measure of safety. In addition to safety, appropriate knots can prevent the necessity of cutting lines.

Knots can be applied in combination to produce complex objects such as lanyards and netting. In ropework, the frayed end of a rope is held together by a type of knot called a whipping knot. Many types of textiles use knots to repair damage. Macrame, one kind of textile, is generated exclusively through the use of knotting, instead of knits, crochets, weaves or felting. Macrame can produce self-supporting three dimensional textile structures, as well as flat work, and is often used ornamentally or decoratively.

Knots invariably weaken the rope they are made in. When knotted rope is strained to its breaking point, barring any flaws or damage in the rope itself, the rope almost always fails in or near the knot. The same bending, crushing, and chafing forces that produce the friction which holds a knot in place are also responsible for unevenly stressing the rope fibers and ultimately lead to the reduction of strength. The exact mechanisms that cause the weakening and failure are complex and are the subject of continued study.

The relative knot strength, also called knot efficiency, is the breaking strength of a knotted rope expressed as a percentage of the breaking strength of the rope without the knot. There are many difficulties in determining an overall numeric knot efficiency for a given knot. This is due to the many factors that can affect the results of a knot efficiency test: the type of fiber, the style of rope, the size of rope, whether it is wet or dry, how the knot is dressed before loading, how rapidly the knot is loaded, whether the knot is repeatedly loaded, and so on. With those limitations noted, and in order to give a sense of how much loss of strength knots cause, most knots in common usage have an efficiency between 40% and 80%.

While some rope splices can retain nearly the full strength of the rope when forming loops and bends, conventional knots are much more practical in most situations. Thus the prudent knot user will always allow for a large safety margin in the strength of rope chosen for a task due to the weakening effects of knots, aging, damage, shock loading, etc. In general, the safe working load is often specified as between 10% and 20% of the rated breaking strength of the rope being used.[1] For safety of life applications many other factors come into play which are beyond the current scope of this article. Always consult experienced practitioners before using ropes and knots in situations where safety of life, limb, or property is involved.

Even if the rope does not break, a knot may still fail to hold. A knot which holds firm under a variety of adverse conditions is said to be more secure than one that does not. The main ways knots fail to hold are:

The tension from the load causes the rope to work back through the knot in the direction of the load. If this continues far enough the working end will pass into the knot and the knot will unravel and fail. This behavior in knots can be worsened when the knot is repeatedly strained and let slack, dragged over rough terrain, or subject to repeated impacts such as against a mast or flagpole. Even with secure knots some slippage may occur as the knot is first put under real tension. This can be dealt with by leaving plenty of rope at the working end outside of the knot and by dressing the knot cleanly and tightening it as fully as possible before loading. In some cases the use of a stopper knot or, even better, a backup knot can prevent the working end from passing through the knot, but it is generally better to use a more secure knot if one is observed to slip. In life critical uses backup knots are often added to already secure knots in order to maximize safety.

Capsizing (or spilling) a knot is changing its form, rearranging its parts, usually by pulling on specific ends in specific ways. Some knots when used in an inappropriate manner have a tendency to capsize easily or even spontaneously. Often the capsized form of the knot offers little resistance to slipping or unraveling. For an excellent example of a knot that capsizes dangerously, see the discussion of the reef knot used as a bend. Sometimes a knot is intentionally capsized as a method of tying another knot, such as the "lightning method" of tying a Bowline. Some knots, such as the Carrick Bend, are generally tied in one form and then capsized to attain a stronger or more stable form.

In knots that are meant to grip another object, failure can be defined as the knot moving relative to the object being gripped. While the knot itself does not fail, it ceases to perform the desired function. For example a simple Rolling Hitch tied around a railing and pulled parallel to the railing might hold to a certain tension and then start sliding. Sometimes this can be corrected by working-up the knot tighter before subjecting it to load but usually a knot with more wraps, or a different size or type of rope will need to be employed. 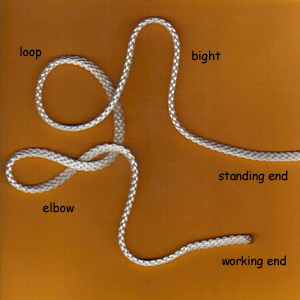 Knot components
File:Turn-roundturn-tworoundturns.jpg
A: Turn
B: Round turn
C: Two round turns

The center part of a length of rope, string, or yarn as opposed to the ends.

Bitter end
More a ropeworker's term than a knot term, the reference is to the end of a rope that is tied off, hence the expression "to the bitter end". A bitt is a metal block with a crosspin used for tying lines to, found on docks.
Loop
A full circle formed by passing the working end over itself. Note that the term 'loop' is also used to refer to a category of knots (see 'Categories' below).
Elbow
Two crossing points created by an extra twist in a loop.
Standing end
The end of the rope not involved in making the knot, often shown as unfinished.
Standing part
Section of line between knot and the standing end.
Turn

Working end
The active end of a line used in making the knot. May also be called the 'running end' or 'live end'.
Working part
Section of line between knot and the working end.

The list of knots is extensive, but common properties allow for a useful system of categorization. For example, loop knots share the attribute of having some kind of an anchor point constructed on the standing end (such as a loop or overhand knot) into which the working end is easily hitched to using a round turn. An example of this is the bowline. Constricting knots often rely on friction to cinch down tight on loose bundles; an example would be the Miller's knot.

Knots may belong to more than one category.

Bend
A knot uniting two lines (for knots joining two ends of the same line, see binding knots or loops). List of bends.
Binding
A knot that restricts object(s) by making multiple winds. List of binding knots.
Coil
Knots used to tie up lines for storage. List of coil knots.
Decorative knot
A complex knot exhibiting repeating patterns often constructed around and enhancing an object. List of decorative knots.
Hitch
A knot tied to a post, cable, ring, or spar. List of hitch knots.
Lashing
A knot used to hold (usually) poles together. List of lashing knots.
Loop
A knot used to create a closed circle in a line. List of loop knots.
Plait (or Braid)
A number of lines interwoven in a simple regular pattern. List of plait knots.
Slip (or Running)
A knot tied with a hitch around one of its parts, contrasted. with a loop, which is closed with a bend. A slip knot can be closed, a loop remains the same size. List of slip knots.
Seizing
A knot used to hold two lines or two parts of the same line together. List of seizing knots.
Sennit
A number of lines interwoven in a complex pattern. List of sennit knots.
Splice
A knot formed by interweaving strands of rope rather than whole lines. More time consuming but usually stronger than simple knots. List of splices.
Stopper
A knot tied to hold a line through a hole. List of stopper knots.
Trick
A knot that is used as part of a magic trick, a joke, or a puzzle. List of trick knots.
Whipping
A binding knot used to prevent another line from fraying.

Retrieved from "http://en.scoutwiki.org/index.php?title=Knot&oldid=37147"
Categories:
Cookies help us deliver our services. By using our services, you agree to our use of cookies.