A rope is a length of fibers, twisted or braided together to improve strength for pulling and connecting. It has tensile strength but is too flexible to provide compressive strength (i.e., it can be used for pulling, not pushing). Rope is thicker and stronger than similarly constructed cord, line, string, or twine. Common materials for rope include natural fibers such as Manila hemp, hemp, linen, cotton, coir, jute, and sisal. Synthetic fibers in use for rope-making include polypropylene, nylon, polyester (e.g. PET), polyethylene (e.g. Spectra) and Aramids (e.g. Twaron, Technora and Kevlar). Some ropes are constructed of mixtures of several fibres or use co-polymer fibres. Ropes can also be made out of metal fibers. Ropes have been constructed of other fibrous materials such as silk, wool, and hair, but such ropes are not generally available.

Rope is of paramount importance in fields as diverse as construction, seafaring, exploration, sports and communications and has been since prehistoric times. In order to fasten rope, a large number of knots have been invented for various uses. Pulleys are used to redirect the pulling force to another direction, and may be used to create mechanical advantage, allowing multiple strands of rope to share a load and multiply the force applied to the end. Winches and capstans are machines designed to pull ropes.

Laid rope, also called twisted rope, is historically the prevalent form of rope, at least in modern western history. Most twisted rope consists of three strands and is normally right-laid, or given a right handed twist. Typically, a three strand laid rope is called a plain or hawser-laid rope. A four strand rope is usually called shroud-laid, and a rope twisted out of 3 or more ropes is called cable-laid. 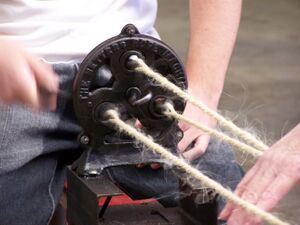 Twisted ropes are built up in three steps. First, fibers are gathered and spun to form yarns. A number of these yarns are then twisted together to form strands. The strands are then twisted together to form the rope. The twist of the yarn is opposite to that of the strand, and that in turn is opposite to that of the rope. This counter-twisting helps keep the rope together. On the other hand, rope constructed in this manner untwists under tension, which is the cause of spinning, kinking, hockling and stretching. Any rope of this type must be bound at its end by some means to prevent untwisting. Twisted ropes have a preferred direction for coiling. Normal right laid rope should be coiled with the sun, or clockwise, to prevent kinking. Coiling this way imparts a twist to the rope. One of the drawbacks of this construction is that every fiber is exposed to abrasion numerous times along the length of the rope. This means that the rope can degrade to numerous inch-long fiber fragments, which is not easily detected visually.

Braided ropes are generally made from nylon, polyester or polypropylene. Nylon is chosen for its elastic stretch properties and good resistance to ultraviolet light. Polyester is about 90% as strong as nylon but stretches less under load, is more abrasion resistant, has better UV resistance, and has less change in length when wet. Polypropylene is preferred for low cost and light weight (it floats on water).

There are many different kinds of braided line. Double braid line has an outer and inner braid that may be of the same or different material. Single braid has no core at all. Kernmantle rope has a core (kern) of long twisted fibers in the center, with a braided outer sheath or mantle of woven fibers. The kern provides most of the strength (about 70%), while the mantle protects the kern and determines the handling properties of the rope (how easy it is to hold, to tie knots in, and so on). In dynamic climbing line, the core fibers are usually twisted, and chopped into shorter lengths which makes the rope more stretchy. Static kernmantle ropes are made with untwisted core fibers and tighter braid, which causes them to be stiffer in addition to limiting the stretch.

Braided ropes (and objects like garden hoses, fiber optic or coaxial cables, etc.) that have no lay, or inherent twist, will uncoil better if coiled into figure-8 coils, where the twist reverses regularly and essentially cancels out.

Plaited rope is made by braiding twisted strands, and is also called square braid. It is not as round as twisted rope and coarser to the touch. It is less prone to kinking than twisted rope and, depending on the material, very flexible and therefore easy to handle and knot. This construction exposes all fibers as well, with the same drawbacks as described above. Brait rope is a combination of braided and plaited, a non-rotating alternative to laid three-strand ropes. Due to its excellent energy-absorption characteristics, it is often used by arborists. This type of construction was pioneered by Yale Cordage. 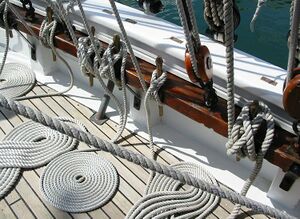 Rope made from hemp, cotton or nylon is generally stored in a cool dry place for proper storage. To prevent kinking it is usually coiled. To prevent fraying or unraveling, the ends of a rope are bound with twine, tape, or heat shrink tubing. The ends of plastic fiber ropes are often melted and fused solid. If a load-bearing rope gets a sharp or sudden jolt or the rope shows signs of deteriorating, it is recommended that the rope be replaced immediately and should be discarded or only used for non-load-bearing tasks.

Ropes can also be used as flogging device with widely different impact depending on length, weight, number of strands and the presence or absence of knots.

Thus aboard ships, a rope's end or starter was frequently used to administer the lightest discipline to sailors, while knittles or the fearsome cat o' nine tails was used for more severe punishment.

The Royal Navy used a similar implement for summary discipline: a rope of about 18 inches long, dipped in hot tar to make it heavier and brittle, usually with a knot on the striking end.

The rope is also a metonymical expression, as is the noose, for capital punishment by hanging.

A piece of rope that has a specific purpose is called a line, especially in nautical usage. Examples include clothesline, chalk line, anchor line, stern line, fishing line etc.