After the overhand knot and the figure-of-eight knot, the bowline is the next most useful and easy to learn knot. Many people are taught the slow and all thumbs 'Bunny' method. In fact it can be very fast to tie even under the most difficult of circumstances.

The bowline, like the other 'loop on the end' knots, can be made and then secured over an object like a post. But unlike many other loop knots, the Bowline allows the working end to pass through a ring object before the knot is tied. This unique feature of the Bowline makes it a convenient loop knot and a knot that everyone should master. One bowline tied through another is one way of joining two ropes, although many other knots will preserve a greater share of the rope's initial strength.

The bowline, or more commonly one of its variations such as the double bowline, is sometimes used by climbers to tie the end of the rope to a climbing harness, or the like. The advantage of the bowline in this application is that the knot is easy to untie even after it has been loaded. The disadvantage is that, while it is a very strong knot under load, it has a tendency to loosen up and become untied when it is unloaded and shaken around over a period of time, as might happen during a climb.

John Smith's Seaman's Grammar (published in 1627) is perhaps the first written reference to it, although a "curiously intricate knot…akin to the bowline" was discovered on the rigging of Egyptian Pharaoh Cheops' solar ship during an excavation.

The structure of the bowline is identical to the sheet bend, but with one of the tails of the sheet bend connected to the running part of one of the lines. If you take a bowline, and cut the loop portion near the portion that does not have the tail beside it, you will have two lines joined by a sheet bend. Having such a strong basic knot as the sheet bend at its core, is consistent with the strength of this versatile knot.

Template:Howto This knot can be tied in a number of ways, including in the air, around an object, and around oneself. 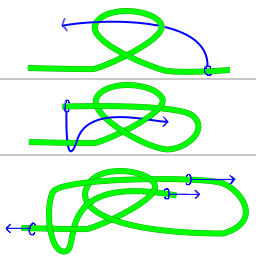 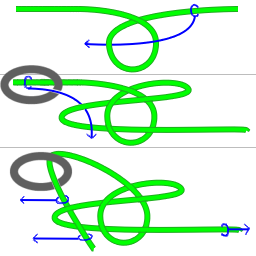 Lightning (aka Jedi) method: Tie a slip knot with the main line as the adjustable end, pass the working end through the loop and pull the slip knot tight until it flips over (capsizes). The resulting knot is a bowline.

Retrieved from "http://en.scoutwiki.org/index.php?title=Bowline&oldid=38933"
Categories:
Cookies help us deliver our services. By using our services, you agree to our use of cookies.