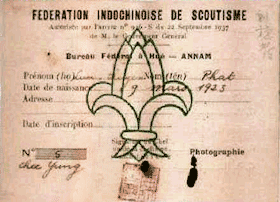 In 1930, Scouting appeared in Indochina and began to develop around schools and colleges in Hanoi and Saigon. André Lefèvre, chief of the Eclaireurs de France, set up a training camp for 60 Scoutmasters from all over French Indochina in 1935 at Đà Lạt. At the end of 1937, French Scouting sent Scoutmaster Raymond Schlemmer to Indochina to oversee the setting up of Scouting in all three regions, creating FIAS.

From 1939 through 1945, the political situation affected Scouting activities all across the country, as World War II engendered independence movements. The French began to lose control and were finally overthrown by Japanese intervention. This ceased the French Scouts' activity in Indochina, as well as all Scouting activities.

During the war, many members of the Scouting movement were separated into different sides. While all members of the General Committee established in 1946 followed Hoàng Ðạo Thúy into hiding, some Scoutmasters and Scout members in the cities began to restore the movement from 1950, especially in Hanoi.

After the Geneva World Scout Conference in 1954, Scouting returned to Indochina. The Scout Association of North Vietnam was abolished as North Vietnam was under communist rule, and as a result, the Scouts lost their former training ground, but soon established a new one near Đà Lạt.

The symbolism in the emblem of Fédération Indochinoise des Associations du Scoutisme incorporates the red lotus, and can be seen in the modern emblems of the Scouts Lao and the Hội Hướng Đạo Việt Nam.