From ScoutWiki, For Everyone, Everywhere involved with Scouting and Guiding...
(Redirected from J. S. Wilson)
Jump to navigation Jump to search 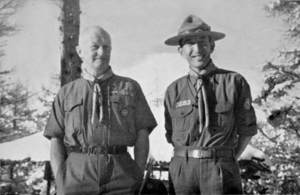 J.S. Wilson with Mishima Michiharu, Chief Scout of Japan, at the national training camp at Lake Yamanaka, on the slopes of Mount Fujiyama, December 1952

Colonel John Skinner "Belge" Wilson (1888—1969) was a Scottish Scouting luminary and friend and contemporary of General Baden-Powell, recruited by him to head the International Bureau, later to become the World Bureau of the World Organization of the Scout Movement.

Baden-Powell visited India in 1921, where he met and recruited Colonel Wilson, who was then Senior Deputy Commissioner of Police in Calcutta, and in his free time was serving as Calcutta's District Scout Commissioner.

Colonel Wilson ran Gilwell Park for The Scout Association in the early 1920s. He served as Director of the Boy Scouts International Bureau for 15 years, tasked with coordinating various Scout movements within countries and between them prior to the establishment of World Scout Regions. After retirement, he served as Honorary President of the Boy Scouts International Committee for a further four years.

Colonel Wilson was awarded the Bronze Wolf, the only distinction of the World Organization of the Scout Movement, awarded by the World Scout Committee for exceptional services to world Scouting, in 1937.

Wilson introduced an international Scout badge in 1939-a silver fleur-de-lis or arrowhead badge on a purple background surrounded by the names of the five continents in silver within a circular frame. The wearing of it was not universal, but was confined to past and present members of the International Committee and staff of the Bureau. A flag of similar design followed, the flying of which was restricted to international Scout gatherings.

File:SrtW1957u.jpg
Scouting Round the World

Wilson took a six-year world tour reviewing the world's Scout organizations, culminating in a five-month tour of Asia in October 1952. Upon the 50th anniversary of World Scouting in 1957, Colonel Wilson took his research notes gathered on the trip and authored the publication of the first edition of the seminal work on world Scouting, Scouting Round the World.

Wilson, a Colonel, became known for heading the Scandinavian branch of the Special Operations Executive during World War II. He was also involved in the Anglo-Norwegian Collaboration Committee, and for his work he was proclaimed Commander of the Royal Norwegian Order of St. Olav.

Retrieved from "http://en.scoutwiki.org/index.php?title=John_Skinner_Wilson&oldid=49289"
Categories:
Cookies help us deliver our services. By using our services, you agree to our use of cookies.