From ScoutWiki, For Everyone, Everywhere involved with Scouting and Guiding...
(Redirected from Robert Baden-Powell, 1st Baron Baden-Powell)
Jump to navigation Jump to search 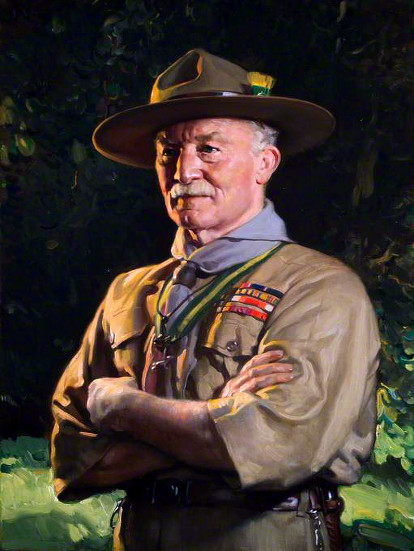 After having been educated at Charterhouse School, Baden-Powell served in the British Army from 1876 until 1910 in India and Africa. In 1899, during the Second Boer War in South Africa, Baden-Powell successfully defended the city in the Siege of Mafeking. He started writing books on military topics in order to better train soldiers. Several of his military books, written for military reconnaissance and scout training in his African years, were also read by boys.

Based on those earlier books, he wrote Scouting for Boys, published in 1908 by Cyril Arthur Pearson, for youth readership. During writing, he tested his ideas through a camping trip on Brownsea Island in 1907, which is now seen as the beginning of Scouting. After his marriage with Olave St Clair Soames, he, his sister Agnes Baden-Powell and notably his wife actively gave guidance to the Scouting Movement and the Girl Guides Movement.

Baden-Powell was born at 9 Stanhope Street, Paddington in London, in 1857. He was the seventh of eight sons among ten children from the third marriage of Reverend, a Savilian professor of geometry at Oxford University. His father died when he was three, and as tribute to his father, the family name Powell was changed to Baden-Powell. Subsequently, Robert Baden-Powell was raised by his mother, Henrietta Grace Powell née Smyth, a strong woman who was determined that her children would succeed. Baden-Powell would say of her in 1933 "The whole secret of my getting on lay with my mother.

After attending Rose Hill School, Tunbridge Wells, Baden-Powell was awarded a scholarship to Charterhouse, which is a prestigious public school. His first introduction to Scouting skills was through stalking and cooking game while avoiding teachers in the nearby woods, which were strictly out-of-bounds. He also played the piano and violin, was an ambidextrous artist, and enjoyed acting. Holidays were spent on yachting or canoeing expeditions with his brothers.

In 1876, Baden-Powell joined the 13th Hussars in India. He enhanced and honed his military scouting skills amidst the Zulu tribesmen in the early 1880s in the Natal province of South Africa, where his regiment had been posted, and where he was mentioned in despatches. During one of his travels, he came across a large string of wooden beads, worn by the Zulu king Dinizulu, which was later incorporated into the Wood Badge training programme he started after he founded the Scouting movement. Baden-Powell's skills impressed his superiors and he was subsequently transferred to the British secret service.

Baden-Powell was posted in Malta for three years as intelligence officer for the Mediterranean. He frequently travelled disguised as a butterfly collector, incorporating plans of military installations into his drawings of butterfly wings. He then led a successful campaign in Ashanti, Africa, and at the age of 40 was promoted to lead the 5th Dragoon Guards in 1897 in India. A few years later he wrote a small manual, entitled "Aids to Scouting", a summary of lectures he had given on the subject of military scouting, to help train recruits. Using this and other methods he was able to train them to think independently, use their initiative, and survive in the wilderness.

He returned to South Africa prior to the Second Boer War and was engaged in actions against the Zulus. By this time, he had been promoted as the youngest colonel in the British army. He was responsible for the organisation of a force of frontiersmen to assist the regular army. Whilst arranging this, he was trapped in the Siege of Mafeking, and surrounded by a Boer army, at times in excess of 8,000 men. Although wholly outnumbered, the garrison withstood the siege for 217 days. Much of this is attributable to cunning military deceptions instituted at Baden-Powell's behest as commander of the garrison. Fake minefields were planted and his soldiers were ordered to simulate avoiding non-existent barbed wire while moving between trenches.

During the siege, a cadet corps, consisting of white boys below fighting age, was used to stand guard, carry messages, assist in hospitals and so on, freeing the men for military service. Although Baden-Powell did not form this cadet corps himself, and there is no evidence that he took much notice of them during the Siege, he was sufficiently impressed with both their courage and the equanimity with which they performed their tasks to use them later as an object lesson in the first chapter of Scouting for Boys. The siege was lifted in the Relief of Mafeking on May 16, 1900. Promoted to Major-General, Baden-Powell became a national hero. After organising the South African Constabulary (police), he returned to England to take up a post as Inspector General of Cavalry in 1903.

Although he could doubtlessly have become Field Marshal, Baden-Powell decided to retire from the Army in 1910 with the rank of Lieutenant-General on the advice of King Edward VII, who suggested that he could better serve his country by promoting Scouting.

On the outbreak of World War I in 1914, Baden-Powell put himself at the disposal of the War Office. No command, however, was given him, for, as Lord Kitchener said: "he could lay his hand on several competent divisional generals but could find no one who could carry on the invaluable work of the Boy Scouts.

In January 1912, Baden-Powell met the woman who would be his future wife, Olave St Clair Soames on the ocean liner Arcadian heading for New York to start one of his Scouting World Tours. She was a young woman of 23, while he was 55, a not uncommon age difference in that time, and they shared the same birthday. They became engaged in September of the same year, causing a media sensation due to Baden-Powell's fame. To avoid press intrusion, they married in secret on October 30, 1912. The Scouts of England each donated a penny to buy Baden-Powell a wedding gift, a car (note that this is not the Rolls-Royce they were presented with in 1929). There is a monument to their marriage inside St Mary's Church, Brownsea Island.

Baden-Powell and Olave lived in Pax Hill near Bentley, Hampshire from about 1919 until 1939. The house was a gift of her father. Directly after he had married, Baden-Powell had begun to have problems with his health, suffering bouts of illness. He complained of persistent headaches, which were considered by his doctor to be of psychosomatic origin and treated with dream analysis.[1] The headaches subsided upon his moving into a makeshift bedroom set up on his balcony. In 1934, his prostate was removed.

In 1939, he moved to a cottage he had commissioned in Kenya, a country he had previously visited to recuperate. His house, which he named Paxtu, was located near the famed Treetops Hotel in Nyeri, owned by Eric Sherbrooke Walker, Baden-Powell's first private secretary and one of the first Scout inspectors. The cottage is now a Scouting Museum.

Baden-Powell died on January 8, 1941 and is buried in Nyeri, Kenya, near Mount Kenya.

The Baden-Powells had three children — one son and two daughters, who all gained the courtesy title of Honourable in 1929. The son succeeded his father in 1941 to the titles of Baronet Baden-Powell and Baron Baden-Powell.

On his return from Africa in 1903, Baden-Powell found that his military training manual, Aids to Scouting, had become a best-seller, and was being used by teachers and youth organisations. Following a meeting with the founder of the Boys' Brigade, Sir William Alexander Smith, Baden-Powell decided to re-write Aids to Scouting to suit a youth readership, and in 1907 held a camp on Brownsea Island for twenty-two boys of mixed social background to test out the applicability of his ideas. Baden-Powell was influenced by Ernest Thompson Seton, who founded the Woodcraft Indians. Seton gave Baden-Powell a copy of his book The Birch Bark Roll of the Woodcraft Indians and they met in 1906. Scouting for Boys was subsequently published in six instalments in 1908.

Boys and girls spontaneously formed Scout troops and the Scouting movement had inadvertently started, first a national, and soon an international obsession. The Scouting movement was to grow up in friendly parallel relations with the Boys' Brigade. A rally for all Scouts was held at Crystal Palace in London in 1909, at which Baden-Powell discovered the first Girl Scouts. The Girl Guides movement was subsequently founded in 1910 under the auspices of Baden-Powell's sister, Agnes Baden-Powell. Baden-Powell' friend, Juliette Gordon Low, was encouraged by him to bring the movement to America, where she founded the Girl Scouts of the USA.

In 1920, the 1st World Scout Jamboree took place in Olympia, and Baden-Powell was acclaimed Chief Scout of the World. Baden-Powell was made a hereditary Baronet in 1922 and was created Baron Baden-Powell, of Gilwell, Co. Essex, on 1929-09-17, Gilwell Park being the International Scout Leader training centre. After receiving this honour, Baden-Powell mostly styled himself Baden-Powell of Gilwell.

In 1929, during the 3rd World Scout Jamboree, he received as a present a new car, which happened to be a Rolls-Royce. This car was soon nicknamed Jam-Roll. He also received an Eccles Caravan, which was nicknamed Eccles Cake, so the Scouts attending the event were treated with a Jam-Roll towing an Eccles Cake. This combination well served the Baden-Powells in their further travels around Europe. Baden-Powell also had a positive impact on improvements in youth education. Under his dedicated command the world Scouting movement grew. By 1922 there were more than a million Scouts in 32 countries; by 1939 the number of Scouts was in excess of 3.3 million.

February 22, the joint birthday of Robert and Olave Baden-Powell, is marked as Founder's Day by Scouts and Thinking Day by Guides to remember and celebrate the work of the Chief Scout and Chief Guide of the World.

Baden-Powell made many paintings and drawings and wrote many articles, monographs, letters, and over thirty books, of which Scouting for Boys was the most famous.

In 1937 Baden-Powell was appointed to the Order of Merit, one of the most exclusive awards in the British honours system, and he was also awarded 28 decorations by foreign states.

The Bronze Wolf, the only distinction of the World Organization of the Scout Movement, awarded by the World Scout Committee for exceptional services to world Scouting, was first awarded to Baden-Powell by a unanimous decision of the then International Committee on the day of the institution of the Bronze Wolf in Stockholm in 1935. He was also the first recipient of the Silver Buffalo Award in 1926, the highest award conferred by the Boy Scouts of America.

In 1931, Major Frederick Russell Burnham dedicated Mount Baden-Powell in California to his old Scouting friend from forty years before. Today their friendship is honoured in perpetuity with the dedication of the adjoining peak, Mount Burnham.

Baden-Powell was nominated for the Nobel Peace Prize for the year 1939, but the Norwegian Nobel Committee decided not to award any prize for that year due to the start of World War II.

Retrieved from "http://en.scoutwiki.org/index.php?title=Robert_Baden-Powell&oldid=49845"
Categories:
Cookies help us deliver our services. By using our services, you agree to our use of cookies.