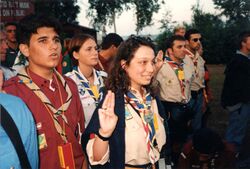 The World Scout Moot is a gathering of older Scouts, mainly Rover Scouts, ages 18-25 (although there was no upper age limit for the earlier Moots) from all over the world. Moots are held every four years and are organised by the World Organisation of the Scout Movement (WOSM).

The original name was World Rover Moot, which was later changed to World Scout Moot, because the term Rover was less and less used.

The World Scout Jamboree is a similar event, also organised by the WOSM, for Scouts aged 14-17.

The next World Scout Moot will be held in Canada in 2013.

This article is a stub. You can help ScoutWiki by expanding it.
Retrieved from "http://en.scoutwiki.org/index.php?title=World_Scout_Moot&oldid=49624"
Categories:
Cookies help us deliver our services. By using our services, you agree to our use of cookies.