Scouting and Guiding in Nevada

Scouting in Nevada has a long history, from the 1910s to the present day, serving thousands of youth in programs that suit the environment in which they live.

The first Girl Scout troop in Nevada was formed in Boulder City, Nevada on April 15, 1932.

Boy Scouts of America in Nevada 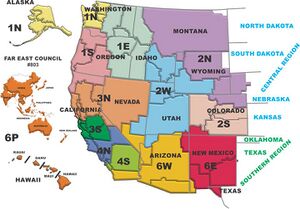 There are four Boy Scouts of America local councils in Nevada.

For more details on this topic, see Scouting in Nevada.

There are two Girl Scout council offices in Nevada.

Retrieved from "http://en.scoutwiki.org/index.php?title=Scouting_and_Guiding_in_Nevada&oldid=47654"
Category:
Cookies help us deliver our services. By using our services, you agree to our use of cookies.