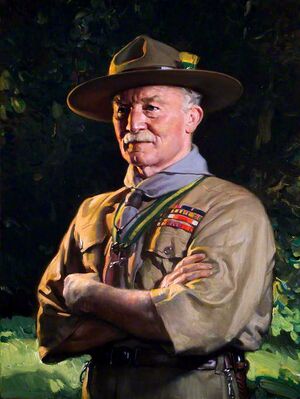 Baden-Powell, the founder of the Scout Movement

Scouts' Day is a generic term for special days observed by members of the World Organization of the Scout Movement throughout the year. Some of these days have religious significance, while others may be a simple celebration of Scouting.

Individual Groups and Councils also celebrate their own Founding at various times of the year, although these are generally restricted to "major" anniversaries, such as a decennial.

St. George is the patron saint of The Scout Association and the nearest Sunday to April 23 is observed as a celebration.

The day is celebrated usually with parades, scouting awards and church services where Scouts re-affirm the Scout Promise.

The Boy Scouts of America have designated the Sunday preceding February 8 as Scout Sunday and the following Saturday is designated as Scout Sabbath.

The day is meant to mark the founding of the Scouts in the United States. Observation varies by unit and locale. Scouts go to their places of worship in uniform and help with the service.

In the Girl Scouts of the USA, the equivalent holiday is Girl Scout Sunday or Girl Scout Sabbath, celebrated in the week that includes March 12, the day the GSUSA was founded by Juliette Gordon Low [1].

Among Girl Guides and Girl Scouts, and some boy-oriented associations (i.e. Greece, where it is called Imera Skepseos), Thinking Day is celebrated each February 22, chosen as it was the birthday of Scouting founder Robert Baden-Powell and of Olave Baden-Powell.

Retrieved from "http://en.scoutwiki.org/index.php?title=Scouts%27_Day&oldid=26034"
Category:
Cookies help us deliver our services. By using our services, you agree to our use of cookies.