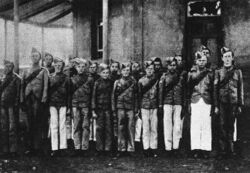 The Mafeking Cadets, with their leader Sergeant-Major Warner Goodyear on the right.

The Mafeking Cadet Corps was a group of boy cadets during the Siege of Mafeking in South Africa. They are sometimes seen as forerunners of the Scouts, because they were one of Robert Baden-Powell's inspirations in creating of the Scout movement in 1907.

The siege of Mafeking took place over 217 days during the Second Boer War in 1899-1900. Robert Baden-Powell was the British colonel charged with defending the town. Because of the shortage of manpower in the town, boys were used to support the troops, carry messages, and help in the hospital. This freed up men for military duties, and kept the boys occupied.

The cadets consisted of volunteer white boys below fighting age. Their leader was the 13 year old Warner Goodyear, who became their Sergeant-Major. They were given khaki uniforms and a wide-brimmed hat which they wore with one side turned up, and a Glengarry cap, and the towns people often commented on their smartness.

One of the cadets' duties was to carry messages around the town and to outlying forts, sometimes as much as a mile away across open ground. At first they used donkeys, but as the siege ran on, food became scarce and the donkeys ended up in the kitchen. From then on, the cadets used bicycles instead.

Another important duty was to act as lookouts, mainly to warn the townspeople when the Boer siege guns were aimed and fired at different parts of the town.

The town produced its own postage stamps, known as "Mafeking Blues", for postage during the siege. The first stamps depicted Baden-Powell, followed by a stamp depicting the cadet leader Warner Goodyear seated on a bicycle[1]. The Mafeking stamps are unusual among the stamps of the British Empire, because they do not depict the monarch.

Frankie Brown, a 9 year old boy, was killed by a shell during the siege, and is sometimes claimed as a cadet casualty, although it is unlikely that he was a cadet. The youngest cadets on the nominal roll were aged 11.

At the end of the siege, 38 Cadets were awarded the Defence of Mafeking bar to the Queen's South Africa Medal.

Baden-Powell was impressed by the cadets and used them as an example of bravery in "Campfire yarn number one" in the opening chapter of Scouting for Boys, the first Scout handbook, which he published in 1908. He relates the following conversation with one of the cadets:

I said to one of these boys on one occasion, when he came in through rather a heavy fire: 'You will get hit one of these days riding about like that when shells are flying'. And he replied 'I pedal so quick, Sir, they'd never catch me'.

The Mafeking Cadets are sometimes called the first Boy Scouts, although they were not Scouts in the true sense, as they did not take a Scout Promise. Scouting was born later, in 1907 at Brownsea Island in Britain.

Retrieved from "http://en.scoutwiki.org/index.php?title=Mafeking_Cadet_Corps&oldid=37064"
Categories:
Cookies help us deliver our services. By using our services, you agree to our use of cookies.