The Siege of Mafeking was the most famous British action in the Second Boer War. It took place at the town of Mafeking (now Mafikeng) in South Africa over a period of 217 days, from October 1899 to May 1900, and turned Robert Baden-Powell, who went on to found the Scouting Movement, into a national hero. The Relief of Mafeking (the lifting of the siege) was a decisive victory for the British and a crushing defeat for the Boers.[1]

Shortly before the outbreak of the Second Boer War in 1899, Lord Wolseley, Commander-in-Chief of the British Army, who had failed to persuade the British government to send troops to the region, instead sent Colonel (later Lord) Baden-Powell, accompanied by a handful of officers, to the Cape Colony to raise two Regiments of Mounted Rifles from Rhodesia (now Zimbabwe). Their aims were to resist the expected Boer invasion of the Natal Colony (now KwaZulu-Natal Province), draw the Boers away from the coasts to facilitate the landing of British troops, and, through a demonstrable British presence, deter the local people from siding with the Boers.

Like the British government, the local politicians feared that increased military activity might provoke a Boer attack, so Baden-Powell found himself having to obtain many of his own stores, organise his own transport and recruit in secret. With barely trained forces and aware of the Boers' greatly superior numbers, commando tactics and the failure of the earlier Jameson Raid, Baden-Powell decided that the best way to tie down Boer troops would be through defence rather than attack. Consequently he chose to hold the town of Mafeking due to its location - both near the border and on the railway between Bulawayo and Kimberley - and because of its status as a local administrative centre. As well, the town had good stocks of food and other necessities. 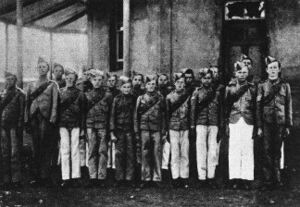 Mafeking Cadets during the siege

The Mafeking forces comprised the Protectorate Regiment of around 500 men, around 300 from the Bechuanaland Rifles and the Cape Police, and a further 300 men from the town. A cadet corps of boys aged 12 to 15, later to be one of the inspirations for the Scouting Movement,[1] was also formed to act as messengers and orderlies. The recruitment of these cadets released men to fight, bringing the total engaged in the military effort to around 2000. Even though it was supposed to be a "white man's war" Baden-Powell also armed 300 African natives with rifles. They were nicknamed the "Black Watch" and used to guard the perimeter.[2]:424-425

Work to build defences around the 6-mile (9.7 km) perimeter of Mafeking started on 19 September 1899; the town would eventually be equipped with an extensive network of trenches and gun emplacements. President Kruger of the independent Boer South African Republic declared war on 12 October 1899. Under the orders of General Cronje the Mafeking railway and telegraph lines were cut the same day, and the town began to be besieged from 13 October. Mafeking was first shelled on 16 October after Baden-Powell ignored Cronje's 9 o'clock deadline to surrender.

Although outnumbered by over 8,000 Boer troops, the garrison withstood the siege for 217 days, defying the predictions of the politicians on both sides. Much of this was attributable to some of the cunning military deceptions instituted by Baden-Powell. Fake landmines were laid around the town in view of the Boers and their spies within the town, and his soldiers were ordered to simulate avoiding barbed wire (non-existent) when moving between trenches; guns and a searchlight (improvised from an acetylene lamp and biscuit tin) were moved around the town to increase their apparent number. (See Jon Latimer, Deception in War, London: John Murray, 2001, pp.32–5.) A howitzer was built in Mafeking's railway workshops, and even an old cannon (dated 1770, it coincidentally had "B.P. & Co." engraved on the barrel)[2]:424 was pressed into service. Noticing the Boers had failed to remove any of the rails, Baden-Powell had an armoured train from the Mafeking railyard loaded with sharpshooters and sent up the rail line in a daring attack right into the heart of the Boer camp, followed by a safe return to Mafeking.

File:LongTom.jpg
The Boer 'Long Tom' in action during the siege

The morale of the civilian population was also given attention, and Sunday ceasefires were negotiated so that sports, competitions and theatrical performances could be held. Notable were the cricket matches held on a Sunday. Initially, the religious sensibilities of General J. P. Snyman (in command after Cronje departed) were offended, and he threatened to fire upon the players if they continued. Eventually Snyman relented and even invited the British to a game. Baden-Powell, replied that first he had to finish the present match, in which the score was '200 days, not out'![3]

As in the case of the nearby Siege of Kimberley, the Boers decided that the town was too heavily defended to take. On 19 November, 4,000 Boers were redeployed elsewhere, although the siege remained and shelling of Mafeking continued. Aware of the approaching British relief columns, the Boers launched a final major attack early in the morning of 12 May, that succeeded in breaching the perimeter defences and setting fire to some of the town, but were finally beaten back.

On 12 May, at about 4 am, Field Cornet S. Eloff led a force of 240 Boers in a daring assault on Mafeking. Covered by a feint attack on the east side of the town, the attackers slipped between the Hidden Hollow and Limestone forts on the western face of the defences. Guided by a British deserter, they followed a path beside the Molopo River to where it enters the Stadt, the village where the native Africans lived. Eloff's party burst into the Stadt unopposed and set fire to the huts in order to signal the attack's progress to Snyman. By about 5:30 am, the Boers seized the police barracks on the outskirts of Mafeking, killing one and capturing the garrison's second-in-command, Colonel C. O. Hore and 29 others. Eloff picked up the telephone connected with British headquarters and boasted to Baden-Powell of his success.[2]:434

The fire had, however, already alerted Mafeking's garrison, which responded rapidly to the crisis. The African police (of the Baralong tribe) had wisely stayed out of the way when Eloff's party roared through the Stadt. As soon as the Boers moved on, the 109 armed Baralongs cut off Eloff's escape route.[2]:436 Snyman, "the most stolid and supine of all the Boer generals in the war," failed to support Eloff.[2]:434 Meanwhile, Baden-Powell's elaborate telephone network provided him with timely and accurate information. From his headquarters, the British commander directed Major Alick Godley and B Squadron (Protectorate Regiment) to smother the attack and dispatched D Squadron, some armed railway employees and others to help. Eloff's men were soon isolated into three groups.[2]:435-436

With two squadrons, Godley first surrounded a group of Boers holed up in a stone kraal in the Stadt. These men surrendered after a sharp fusillade. Godley drove the second group off a kopje and they mostly managed to escape. All day long, Eloff and the third group held out in the police barracks, finally capitulating in the night. The British lost 12 dead and 8 wounded, mostly Africans. Boer losses were 60 dead and wounded, plus a further 108 captured.[2]:437-438

The siege was finally lifted on 17 May 1900, when British forces commanded by Colonel B T Mahon of the army of Lord Roberts relieved the town after fighting their way in. Among the relief forces was one of Baden-Powell's brothers, Major Baden Fletcher Smyth Baden-Powell. Template:Quote box2 Until reinforcements landed in February 1900, the war was going poorly for the British. The resistance to the siege was one of the positive highlights, and it and the eventual relief of the town excited the liveliest sympathy in Britain. There were immense celebrations in the country at the news of its relief (creating the verb to maffick, meaning to celebrate both extravagantly and publicly). "Maffick" was a back-formation from Mafeking, a place-name that was treated humorously as a gerund or participle. Promoted to the youngest major-general in the army, and awarded the CB, Baden-Powell was also treated as a hero when he finally returned to Britain in 1903.

Three Victoria Crosses were awarded as a result of acts of heroism during the siege, to Sergeant Horace Martineau and Trooper Horace Ramsden for acts during an attack on the Boer Game Tree Fort, and to Captain Charles FitzClarence for Game Tree and two previous actions.

In September 1904 Lord Roberts unveiled an obelisk at Mafeking bearing the names of those who fell in defence of the town. In all, 212 people were killed during the siege, with over 600 wounded. Boer losses were significantly higher. The siege established Baden-Powell as a celebrity in Britain, and thus when he started the Scout Movement a few years later, his fame contributed to its rapid initial growth.

Retrieved from "http://en.scoutwiki.org/index.php?title=Siege_of_Mafeking&oldid=34410"
Categories:
Cookies help us deliver our services. By using our services, you agree to our use of cookies.