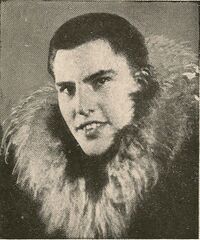 Paul Siple. Picture from the cover of A Bou Scout with Byrd 1931.

Paul Allman Siple (December 18, 1908 – November 25, 1968) was an American Antarctic explorer and geographer who took part in six Antarctic expeditions, including the two Byrd expeditions of 1928–1930 and 1933–1935, representing the Boy Scouts of America as an Eagle Scout.[1] In addition to being an Eagle Scout, Siple was also a Sea Scout.[2] His first and third books covered these adventures. With Charles F. Passel he developed the wind chill factor, and Siple coined the term.

Siple was born in Montpelier, Ohio on December 18, 1908, to Clyde Lavonius Siple and Fannie Hope Allman. His family moved to Erie, Pennsylvania, where he graduated from Central High School in 1926. He became an Eagle Scout in 1923 with 59 merit badges. After an extensive nationwide search in 1928, he was the first Eagle Scout selected for an Antarctic expedition, sailing with Richard E. Byrd on his ship the City of New York. Siple appeared in the documentary film With Byrd at the South Pole (1930).

He became a brother of the Alpha Chi Rho fraternity while attending Allegheny College, in Meadville, Pennsylvania. He married Ruth Ida Johannesmeyer on December 19, 1936.

He also attended Clark University in Worcester, Massachusetts, from which he received a Ph.D. in 1939. His dissertation was on "Adaptations of the Explorer to the Climate of Antarctic". He worked in the Army Scientific Office for most of his career.[2]

Siple was involved with the United States Antarctic Service Expedition of 1939–1941, which would have been the third Byrd expedition. He served during Operation Highjump, (also known as the United States Navy Antarctic Developments Program 1946–1947), developed cold weather gear for the Korean War,[2] and Operation Deep Freeze I in 1955–1956. He was the inaugural scientific leader at the U.S. Amundsen–Scott South Pole Station 1956–1957, during the International Geophysical Year. This activity is covered in his fourth book,90 Degrees South.

Siple is noteworthy because he is one of a very few individuals to participate in all five of the Antarctic expeditions conducted by Richard E. Byrd.