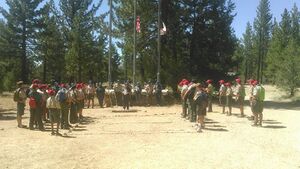 Holcomb Valley Scout Camp , may seem fairly remote but is just a few short miles from Big Bear Lake. It is rich in local history, and has been used in numerous television and movie productions. At the turn of the century, it was still a working cattle ranch and some of the original buildings are still standing, including the ranch house and barn. Picture yourself on a crisp morning, preparing for your day.

Holcomb Valley Scout Ranch, Template:Convert/feet elevation, is located north of Big Bear Lake in the old mining district of Belleville in the Holcomb Valley on the site of the old Hitchcock Ranch. Holcomb Valley Scout Ranch is North of the town of Fawnskin. The road from Fawnskin to Holcomb Valley Scout Ranch the 2N09, Polique Canyon Rd, has improved in 2011. Van Dusen Canyon Rd can also be used get to the Ranch. The camp offers a week-long Oak Badge-National Youth Leadership Training class and offered a Boy Scout summer resident camp until 2012 when the program was suspended indefinitely.[1] One Hike offered is to the Big Bear Discovery Center.[2] Cougar Crest hike to Bertha Peak gives an amazing view of Big Bear Lake.[3] Spring creek trail offers a more level long hike. South of the camp, not far away is the Pacific Crest Trail. To the East and near the camp is a USFS[4] public camp ground Holcomb Valley Camp Ground.

Holcomb Valley Scout Ranch was formerly part of Old Baldy Council. The Scout Ranch was turned over to the San Gabriel Valley Council in 2005. The Old Baldy Council took title to the property in 1965 from William Hitchcock. The Hitchcock Ranch is still part of the Holcomb Valley Scout Ranch.[5] Guy Reide, Old Baldy's Scout Executive(1949 to 1966) in 1965 had the vision and worked with William Hitchcock to have the ranch turned into a Scout camp. Loren Baldwin became the first camp ranger and Holcomb Valley held its first Boy Scout summer resident camp in 1974. Holcomb Valley is named after William F. Holcomb, who discovered gold there and staked a claim in May 1860 with his partner. Holcomb became known for his marksmanship. After 10 years of prospecting he still had no major success. As food sources were diminishing, some of the prospectors hired Holcomb to hunt for grizzly bear to provide food for the long winter months. While trailing a bear up Polique Canyon he found Holcomb Valley. Tracking the injured animal, he passed a quartz ledge shining with gold.[6] Bonanza and many other western films and TV shows were shot in Holcomb Valley. For a short time under Old Baldy Council the camp was called "Camp Lipscomb" after US Congressman Glenard P. Lipscomb.