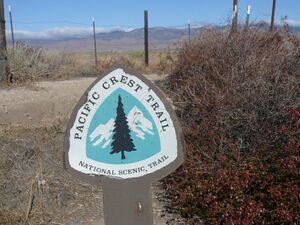 Pacific Crest Trail (commonly abbreviated as the PCT, and officially designated as the Pacific Crest National Scenic Trail) is a long-distance hiking and equestrian trail closely aligned with the highest portion of the Sierra Nevada and Cascade mountain ranges, which lie 100 to 150 miles (160 to 240 km) east of the U.S. Pacific coast. This trail is 2,659 miles long, running from Mexican border (just south of Campo), across California, Oregon and Washington to the Canadian border near Manning park.

Trail elevations range from just above sea level at the Oregon–Washington border to 13,153 feet at Forester Pass in the Sierra Nevada. The route passes through 25 national forests and 7 national parks. Its midpoint is near Chester, California (near Mt. Lassen), where the Sierra and Cascade mountain ranges meet.

It was designated a National Scenic Trail in 1968, although it was not officially completed until 1993. The PCT was conceived by Clinton Churchill Clarke in 1932. It received official status under the National Trails System Act of 1968. It is the westernmost and second longest component of the Triple Crown of Hiking and is part of the 6,875-mile Great Western Loop.

Every year, a great number of avid hikers attempt to hike the entire length of the trail in an outdoor sport - ultra-packing. This endeavor takes about 3-4 months to complete and requires a lot of advanced planning and preparation.

A parallel route for bicycles, the Pacific Crest Bicycle Trail (PCBT) is a 2,500-mile (4,000 km) route designed closely parallel to the PCT on roads. The PCT and PCBT cross in about 27 places along their routes.

There are hundreds and hundreds of trailheads that allow for hiking shorter scenic sections of the trail. They are listed in detail in these subarticles, running south to north: