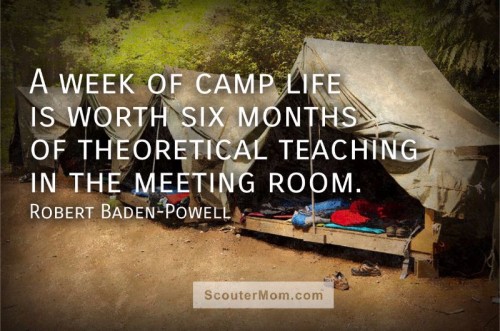 Benefits of Scouting for Youth and Families: 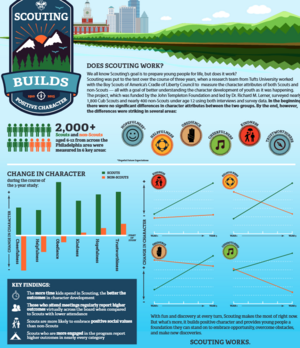 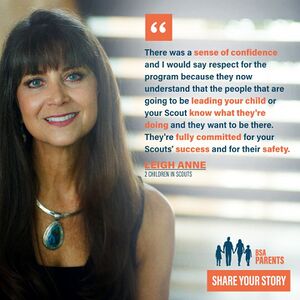 "For over 100 years, Scouting programs have instilled in youth the values of the Scout Oath and Law. Today,these value are just as relevant in helping youth grow to their full potential as they were in 1910. Scouting helps youth develop academic skills, self-confidence, ethics, leadership skills and citizenship skills that influence their adult lives." (The Values of Scouting)

The Boy Scouts of America serves an invaluable purpose in building character and instilling values in America’s youth, and shaping the leaders of tomorrow. As parents, family members and friends of the BSA, we pledge our support for this organization and the value that it brings to communities.

Reaching the Next Generation

In 2006, we reached a population milestone of 300 million people living in the United States, the largest number of people ever to inhabit our country. This milestone was also a sign of change: change in the populations that are growing through birth and immigration, and change in the way these populations become part of the fabric of America.

In the coming decades, the United States will become an even more diverse society. The Hispanic/Latino American and Asian American populations are projected to triple by 2050. And the African American population is expected to almost double during this same time period. Can BSA meet the needs of these growing, diverse populations?

Benefits of Duty to God Program

Founder of scouting, Robert Baden-Powell, made many remarkable observations about the benefits of scouting:

This article is a stub. You can help ScoutWiki by expanding it.
Retrieved from "http://en.scoutwiki.org/index.php?title=Benefits_of_Scouting&oldid=41894"
Categories: