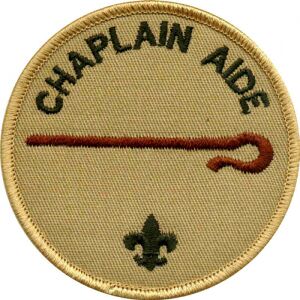 Duty to God disambiguation: This term has multiple usages in the World Scouting Movement.

Duty to God as a part of the form of the Scout Promise has varied slightly from country to country and over time, but must fulfill the requirements of the World Organization of the Scout Movement (WOSM) to qualify a National Scout Organization for membership. Together with clarifying its Scout Law, the Constitution of WOSM states:[1]

Article II, paragraph 2: "Adherence to a Promise and Law"

All members of the Scout Movement are required to adhere to a Scout Promise and Law reflecting, in language appropriate to the culture and civilization of each National Scout Organization and approved by the World Organization, the principles of Duty to God, Duty to others and Duty to self, and inspired by the Promise and Law conceived by the Founder of the Scout Movement in the following terms: 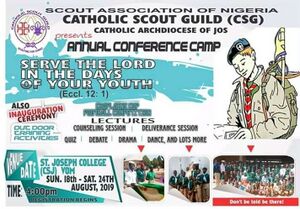 On my honour I promise that I will do my best—
To do my duty to God and the King (or to God and my Country)
To help other people at all times
To obey the Scout Law.

In order to accommodate many different religions within Scouting, "God" may refer to a higher power, and is not specifically restricted to the God of the monotheistic religions. The WOSM Constitution explains "Duty to God" as "Adherence to spiritual principles, loyalty to the religion that expresses them and acceptance of the duties resulting therefrom."

The World Association of Girl Guides and Girl Scouts (WAGGGS), which is a sister organization to WOSM, has the very same wording in their constitution (Part I, Article 2: Original Promise),[2] and follows similar policies.

Although the Constitution of WOSM states that the Promise should include a reference to Duty to God [1], six countries (Belgium, Czechoslovakia, France, Luxembourg, The Netherlands, and Finland) were granted the right in the 1920's to additionally use an alternative promise without a reference to God [3]. Two of these countries still offer this alternative promise (The Netherlands and Czech Republic), where others have abandoned it. WOSM stated in 1932 that no new exceptions will be made and has expressed the hope that the few remaining countries will stop using any promise lacking a reference to Duty to God.

The Israeli Scouts though founded in 1919/1920 and joining WOSM in 1951 and WAGGGS in 1963 also have no 'duty to God' or apparent equivalent in their promise.

Retrieved from "http://en.scoutwiki.org/index.php?title=Duty_to_God&oldid=49942"
Categories:
Cookies help us deliver our services. By using our services, you agree to our use of cookies.