Template:Redirect Template:Latter Day Saint biography/Thomas S. Monson Thomas Spencer Monson (born August 21, 1927) is an American religious leader and author, and the 16th and current President of The Church of Jesus Christ of Latter-day Saints (LDS Church). As president, Monson is considered by adherents of the religion to be a "prophet, seer, and revelator" of God's will on earth. A printer by trade, Monson has spent most of his life engaged in various church leadership positions and in public service.

Monson has received four honorary doctorate degrees, as well as the Boy Scouts of America's Silver Buffalo and the World Organization of the Scout Movement's Bronze Wolf—both awards the highest given in each organization. Monson is Chairman of the Church Boards of Trustees/Education of the Church Educational System, and he was appointed by Ronald Reagan to the U.S. President's Task Force for Private Sector Initiatives. Monson is married to Frances Beverly Johnson Monson, and they are the parents of three children.

Monson was born on August 21, 1927, in Salt Lake City, Utah to G. Spencer Monson (1901–1979) and Gladys Condie (1902–1973).[3] The second of six children, he grew up in a "tight-knit" family—many of his mother's relatives living on the same street and the extended family frequently going on trips together.[4] The family's neighborhood included several residents of Mexican descent, an environment in which he says he developed a love for the Mexican people.[5] Monson often spent weekends with relatives on their farms in Granger (now part of West Valley City), and as a teenager, Monson took a job at the printing business his father managed.[4]

From 1940 to 1944, Monson attended West High School in Salt Lake City. In the fall of 1944, he enrolled at the University of Utah. Around this time he met his future wife, Frances, whose family came from a higher social class on the east side of the city. Her father, Franz Johnson, felt an immediate connection because Monson's great uncle had baptized him into the LDS Church in Sweden.[4]

In 1945, at age 17, Monson joined the United States Naval Reserve and anticipated participating in World War II in the Pacific theater.[1] He was sent to San Diego, California but was not moved overseas before the end of the war. His tour of duty lasted six months beyond the end of the war, and after it was completed he returned to the University of Utah. Monson graduated cum laude in 1948 with a bachelor's degree in business management.[6] Monson did not serve a full-time mission as a youth. At age 21, on October 7, 1948, he married Frances Beverly Johnson in the Salt Lake Temple.[7] The couple eventually had three children: Thomas Lee, Ann Frances, and Clark Spencer.

After college he rejoined the Naval Reserve with the aim of becoming an officer. Shortly after receiving his commission acceptance letter, his ward bishop asked him to serve as a counselor in the bishopric. Time conflicts with bishopric meetings would have made serving in the Navy impossible. After discussing things with church apostle Harold B. Lee, (his former stake president), Monson declined the commission and applied for a discharge. The Navy granted his discharge in the last group processed before the Korean War. Lee set him apart six months later as a bishop—mentioning in the blessing that he likely would not have been called if he had accepted the commission.[8][9]

Monson taught for a time at the University of Utah, then began a career in publishing. His first job was with the Deseret News, where he became an advertising executive. He joined the advertising operations of the Newspaper Agency Corporation when it was formed in 1952. Monson later transferred to the Deseret News Press, beginning as sales manager and eventually becoming general manager.[10] While with Deseret News Press, Monson worked to publish LeGrand Richards's A Marvelous Work And A Wonder. He also worked with Gordon B. Hinckley, the LDS Church's representative on publications, with whom he later served in the First Presidency.

On May 7, 1950, Monson became an LDS bishop at age 22. He had previously served as ward clerk, ward YMMIA superintendent, and as a counselor in a bishopric.[10] At the time, Monson's Salt Lake City ward contained over 1,000 people, including 85 widows whom he visited regularly.[11] He continued his visits to these widows when he was released after five years of service. He brought them gifts during the Christmas season, including poultry he had raised himself.[12] Monson eventually spoke at the funerals of each of these women.[2]

At age 27, Monson became a counselor to a stake president in Salt Lake City, and he became a mission president at age 31. As mission president, he presided over the Canadian Mission of the LDS Church from 1959 to 1962, supervising church missionaries who were not much younger than he was. The Canadian Mission consisted of Ontario and Quebec; it was under the leadership of Monson that missionary work began among the French-speaking population of Quebec.[13]

Upon his return to Utah after his mission to Canada, Monson resumed his work with the Deseret News until he was called to be an apostle in 1963 at age 36—he was the youngest apostle in the church since Joseph Fielding Smith, who had become an apostle in 1910 at age 33. Prior to being called as an apostle, Monson held a few positions on church committees, including the Priesthood Home Teaching Committee.[10] 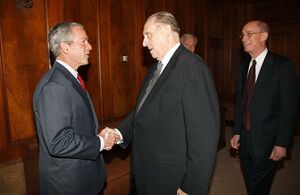 Monson, accompanied by Henry B. Eyring, shakes hands with George W. Bush on May 29, 2008, in the Church Administration Building in Salt Lake City, Utah.

As an apostle of the LDS Church, Monson worked in many capacities all around the world. With his business background, he helped oversee many operations of the church including KSL Newsradio and Bonneville International. He was chair of the Scripture Publication Committee in the 1970s that oversaw publication of the LDS Church edition of the King James Bible and revised editions of LDS Church scriptures containing footnotes and guides. He has also overseen the church's Printing Advisory, Missionary Executive and General Welfare Committees. While an apostle, he continued his education and received his master of business administration degree from Brigham Young University in 1974.[10]

Monson also oversaw church operations in Eastern Europe and helped the church gain access to its members in the Soviet bloc. In 1982, he organized the first stake in East Germany and was instrumental in obtaining permission for the church to build a temple in Freiberg, East Germany, in 1985.[14]

Monson also served for several years on the boards of businesses and organizations not owned by the LDS Church. From 1969 to 1988 Monson was on the Mountain Bell Board of Advisors. He served as a member of the board of directors of Commercial Security Bank, and chaired the bank's audit committee for 20 years. In 1993 when the bank was bought out by Key Bank, Monson was made a member of the Board of Directors of Key Bank. This was one of multiple positions that Monson resigned in 1996 when it was decided that General Authorities should leave all business boards of directors, with the lone exception of the board of Deseret Management Corporation.[16]

Following the death of Church President Spencer W. Kimball in 1985, newly selected church president Ezra Taft Benson asked Monson and Gordon B. Hinckley to serve as his second and first counselors, respectively. Monson and Hinckley also served as counselors to Benson's successor, Howard W. Hunter.[18] When Hinckley succeeded Hunter in 1995, Monson became his first counselor. He served until Hinckley's death on January 27, 2008. As the second in seniority among the apostles behind Hinckley, Monson simultaneously served as President of the Quorum of the Twelve Apostles; Boyd K. Packer (then third in seniority behind Hinckley and Monson) served as Acting President during that time.[19] 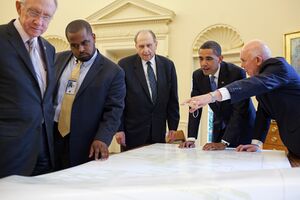 Monson became the 16th president of the LDS Church on February 3, 2008, succeeding Gordon B. Hinckley, who had died seven days earlier. Monson selected Henry B. Eyring and Dieter F. Uchtdorf as his first and second counselors, respectively.[2] When Monson was born, there were fewer than 650,000 members of the church in the world, with most of them being based in the western United States. When he became president, there were over 13 million members worldwide, with the majority of the membership living outside the United States and Canada. As of November 2011, 28 temples announced by Monson are either under construction or in planning.[20][21]

Monson and his counselors in the First Presidency met with President George W. Bush on May 29, 2008 during Bush's visit to Salt Lake City.[22] He and apostle Dallin H. Oaks met with United States Senator Harry Reid and President Barack Obama in the Oval Office on July 20, 2009, presenting President Obama with five volumes of personal family history records.[23] 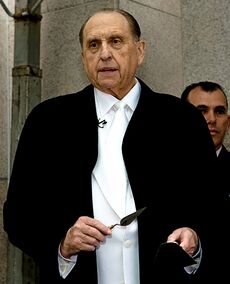 Monson laying the cornerstone during the dedication of the Curitiba Brazil Temple on June 1, 2008

Monson has continued to be active in community and civic affairs. He is past president of the Printing Industry of Utah and a former board member of the Printing Industries of America. A Life Scout and Explorer crew member in his youth, Monson has served in several adult Scouter leadership capacities: merit badge counselor, member of the Canadian LDS Scouting Committee, chaplain at a Canadian Jamboree, and a member of the General Scouting Committee of the LDS Church for ten years. He has been a proponent of the Scouting for Food drive, and since 1969, he has served on the national executive board of the Boy Scouts of America. He also represented the Boy Scouts of America as a delegate to the World Conferences in Tokyo, Nairobi and Copenhagen.[32]

He served on the Utah State Board of Regents. In December 1981, U.S. President Ronald Reagan appointed Monson to the President's Task Force for Private Sector Initiatives. He remained with the initiative until it completed its work in December 1982.[32]

In June 2008, Monson and the other members of the First Presidency sent a letter to local congregations in California, urging them to support Proposition 8 by donating their time and resources, stating that, "Our best efforts are required to preserve the sacred institution of marriage."[33]

Monson has received various awards related to his volunteer and educational involvement. In 1966, Monson was honored as a distinguished alumnus by the University of Utah.[34] His first honorary degree, an Honorary Doctorate of Laws, was conferred upon him in April 1981 by Brigham Young University.[10] Subsequent honorary degrees include a Doctor of Humane Letters from Salt Lake Community College (June 1996), an Honorary Doctor of Business from the University of Utah (May 2007),[1] and an honorary doctorate degree in Humanities from Dixie State College (May 2011).[35]

For his service to Scouting and the community, Monson has received the Boy Scouts of America's Silver Beaver Award (1971) as well as the Silver Buffalo Award (1978), which is the highest honor bestowed by the BSA. In 1993, Monson also received the Bronze Wolf, the highest honor and only award bestowed by the World Organization of the Scout Movement.[36] His citation for this award (bestowed at the October 1993 Priesthood Session of General Conference) says, "In his assignments throughout the world as a leader of [the LDS Church], President Monson has worked tirelessly to bring about the advancement of Scouting in many countries. He has worked closely with the World Organization of the Scout Movement to find ways to strengthen the links between the Church and national Scout associations. He is a committed, solid, hard-working volunteer in the Scout Movement. His Scouting leadership has been exemplary."[32] The Salt Lake chapter of Rotary International also honored Monson at its international convention with its Worldwide Humanitarian Award.[10]

Monson has written a number of books, some of which are compilations of speeches given by him, or of inspiring quotes. Others discuss particular LDS gospel themes.

Retrieved from "http://en.scoutwiki.org/index.php?title=Thomas_S._Monson&oldid=49055"
Categories:
Cookies help us deliver our services. By using our services, you agree to our use of cookies.