Scouting and Guiding in Ghana 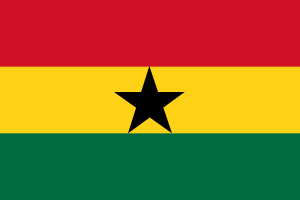 The Scout and Guide movement in Ghana is served by:

History of Scouting in Ghana

In 1895, Baden Powell (the Founder of Scouting) was sent to the Gold Coast to lead an expedition against Nana Prempeh I (King of the Asante tribe). He was sent here to raise a native force to augment the effort of the main British force to oppose the powerful Ashanti tribe. His first job was to make a road from the Coastal areas to the Kumasi (Capital of Asante).[1]

When B-P entered the Kumasi, the capital city of the Ashanti, he was greeted by a warrior chief who held out his left hand. He told B-P "the bravest of the brave shake with the left hand." So began the left handshake which is used by millions of Scouts all over the world. The explanation of the left handshake is that a warrior uses the left hand to hold the shield, while the right hand holds the spears. So to show your trust in someone, you put down the shield and greet them by holding out your left hand.[2]

As a young man, Samuel Wood won a drawing competition, sponsored by the British newspaper The Sheffield Weekly. The prize was a school scholarship, but Wood was unable to take it up as he could not afford the cost of travelling to the United Kingdom. Instead, he was sent books and a subscription to the newspaper. One of the books was Baden-Powell's Scouting for Boys. Wood wrote to Imperial Headquarters of the Scout Movement, in London, and asked them how he could start his own Scout group. A charter was given on 1912-01-04 for the first Gold Coast Scout group. Other groups soon started in other parts of the country.

Samuel Wood continued to be active in Scouting and due to his efforts, the Gold Coast became the first Crown Colony to legislate for the protection of the Scout and Guide Movement. Wood died on 1952-09-09.[3][4]

The first permanent state in the territory of present-day Ghana dates back to the 11th century. Numerous kingdoms and empires emerged over the centuries, of which the most powerful was the Kingdom of Ashanti. Beginning in the 15th century, numerous European powers contested the area for trading rights, with the British ultimately establishing control of the coast by the late 19th century. Following over a century of native resistance, Ghana's current borders were established by the 1900s as the British Gold Coast. It became independent of the United Kingdom on 6 March 1957.

Ghana's population of approximately 28 million spans a variety of ethnic, linguistic and religious groups. According to the 2010 census, 71.2% of the population was Christian, 17.6% was Muslim, and 5.2% practiced traditional faiths. Its diverse geography and ecology ranges from coastal savannahs to tropical rain forests.

Ghana is a unitary constitutional democracy led by a president who is both head of state and head of the government. Ghana's growing economic prosperity and democratic political system have made it a regional power in West Africa. It is a member of the Non-Aligned Movement, the African Union, the Economic Community of West African States (ECOWAS), Group of 24 (G24) and the Commonwealth of Nations.

Various African tribes resided in Ghana for thousands of years. Akan peoples settled Ghana in the 13th century and ruled the region when the first Europeans explored the area. The Portuguese and Dutch established small coastal towns and forts to exploit gold resources. The British later arrived, naming western Ghana the Gold Coast. The Gold Coast was a British colony from the late nineteenth century until independence in 1957. Eastern Ghana was first colonized by the Germans and later administered by the British as a separate colony named British Togoland following the division of the former German colony between the British the French during World War I.

Greater independence movements began in the mid-1950s. Although a series of coups occurred following independence in the 1960s and 1970s, economic growth and stability returned during the presidency of Jerry Rawlings. Unlike most African nations, Ghana experienced little ethnic tension and a slow transition to a democratic government during President Rawlings rule. Ghana retruned to democracy with democratic elections in the 1990s. Ghana has been praised as one of the greatest successes in political stability and democratization in West Africa. 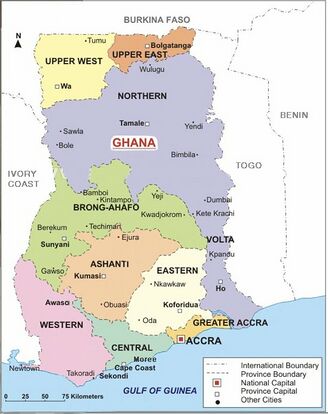 The population exhibits considerable ethnic diversity, with each ethnic group possessing some unique cultural characteristics. Christianity is the primary influence on society in southern and coastal areas whereas Islam is the dominant influence on society in the north. Sports are popular, especially soccer. Music, textiles, and dance occupy an important role in culture. Polygamy is illegal, yet practiced among some according to local custom and Sharia law. Cocaine and marijuana use appears higher than most nations.

English is the official language. Additionally, there are eleven languages that have the status of government-sponsored languages:[6]

Since Ghana is surrounded by French-speaking countries, French is widely taught in schools and universities, as well as a language used for commercial and international economic exchanges.

Retrieved from "http://en.scoutwiki.org/index.php?title=Scouting_and_Guiding_in_Ghana&oldid=49385"
Category:
Cookies help us deliver our services. By using our services, you agree to our use of cookies.