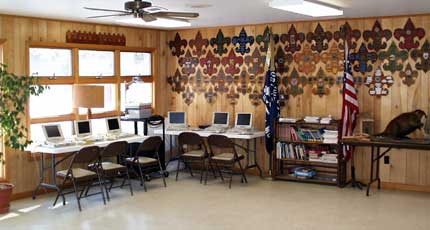 The lounge in the Administration Building, circa 2003.

Henson Scout Reservation[1], also known as Camp Nanticoke, is a 1,500-acre Scout camp located on the Delmarva Peninsula near Galestown, Maryland. One of two Scout camps on the peninsula, it serves thousands of Boy Scouts and Cub Scouts throughout the summer months, and is open year-round for special Scout programs and for rental by outside groups. Boy Scout and Cub Scout summer programs are run separately.

Named for the famous aviator and philanthropist from Salisbury, Maryland (Richard A. Henson), Henson Scout Reservation has been in continuous operation by the Del-Mar-Va Council[2] since the summer of 1965. The camp was originally known as Camp Nanticoke, which is now the name of the primary camping area. (The original plan was to develop two camps on a single reservation - Camp Nanticoke and Camp Choptank - but that never materialized.) Today, the entire reservation is still known by many as simply "Camp Nanticoke."

In November 2006, G. Lee Murdoch was named to succeed J. Ray Teat as director of the camp. Murdoch, a nine-year summer camp staff veteran and Eagle Scout, holds a master's degree in recreation management from Indiana University and a bachelor's in recreation and parks management from Frostburg State University. Teat was named the Del-Mar-Va Council's director of support services.[3]

The camp's largely undeveloped 1,500 acres are widely recognized as an environmental gem, with habitat for countless birds, mammals and fish, including the bald eagle. The entire camp was protected in a conservation easement in partnership with the Nature Conservancy.[4]

Camp Nanticoke offers a wide range of traditional Boy Scout summer camp programs, including swimming, nature/ecology, handicrafts, Scoutcraft (camping and outdoors skills), archery, rifle and shotgun shooting and fishing. Its first-year camper program, known as Brownsea, is extremely popular. Located on the Marshyhope Creek, a tributary of the Nanticoke River, the camp has a thriving waterfront program, offering canoeing, rowing, sailing and motorboating. It also has a BMX biking program.[5]

For older Boy Scouts, the camp offers a high adventure trekking program, involving a week-long canoe/bicycling trek around the Nanticoke River watershed. Its Eagle Base program is designed to give older Scouts the opportunity to earn specialized merit badges required for the Eagle rank. And Project COPE is an extremely popular low- and high-ropes challenge course.[6]

While traditionally Cub Scout have participated in day camps, Henson Scout Reservation offers an overnight/resident camp, designed to introduce Cub Scouts to the basics of camping in a supportive, structured environment. Each year's programs are thematic; the summer 2007 theme is "Exploring the New World," marking the 400th anniversary of Capt. John Smith's exploration of the Chesapeake Bay.[7]