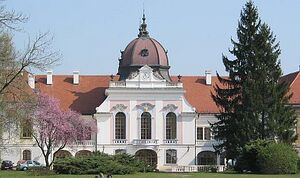 Gödöllő is a town situated in Pest county, Hungary, about 30 km northeast from the outskirts of Budapest. Its population is about 31,000 according to the 2001 census. It can be easily reached from Budapest with the suburban railway (HÉV). Gödöllő is home to the Szent István Egyetem (Saint Stephen University), the main education institute of agriculture in Hungary. The palace at Gödöllő, one of the largest Baroque palaces in Hungary, was originally built for the aristocratic Grassalkovich family, later Franz Josef, Emperor of Austria and King of Hungary and his wife Elisabeth ("Sissi") had their summer residence here.

Hungary hosted the 4th World Scout Jamboree in 1933 at the royal forest of Gödöllő, in which 26,000 Scouts from 54 nations camped together. The camp chief was Teleki Pál, the member of the International Committee who later became Prime Minister of Hungary. This was the first time there was a Jamboree subcamp for Scouts taking part in aviation.

Retrieved from "http://en.scoutwiki.org/index.php?title=Gödöllő&oldid=49653"
Categories:
Cookies help us deliver our services. By using our services, you agree to our use of cookies.