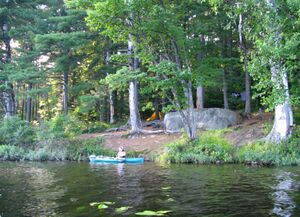 Canoe camping in the Adirondacks. 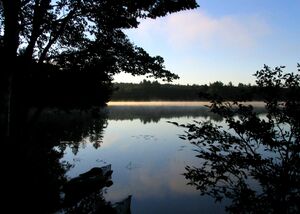 Morning on the lake.

Canoe camping (also known as canoe touring or canoe tripping) is a combination of canoeing and camping. It is similar to backpacking, but canoe campers travel by canoes or kayaks. This is a recreational activity primarily practiced in North America.

A person in a canoe can carry heavier and bulkier loads than a backpacker or kayaker, and can travel farther and more easily under favorable conditions. Portaging by foot is sometimes necessary to pass between water bodies or around hazardous obstacles such as rapids or waterfalls, but most of the time canoe campers travel on water. Because they usually don't have to carry their gear on their backs all day long, canoe campers can bring more food and gear and undertake longer trips. Throwing a few more pounds of dried food in a backpack significantly changes a hiker's life, but a few more pounds in the bottom of a canoe barely make a difference.

Although most experienced trippers feel comfortable paddling straight through large bodies of water, canoers typically stay within a few hundred metres of shore. In fact, since a fully loaded canoe only draws 12 to 16 cm (six to eight inches), it can approach a rocky shore as close as arm's-length. This proximity lets the canoer observe aquatic and near-shore plants and wildlife from a perspective that walking on solid ground does not allow. Many people fish while canoe camping.

Canoeing provides a very different recreational experience than backpacking. It produces less noise, with no crunching boots and bouncing packs. Maneuverability on the water, and the easy shift to portaging over land, allow canoe campers to go places that simply can't be accessed conveniently by other means of transportation. The versatility of canoe tripping allows its campers to go places and see things that they otherwise could not.

Many canoe campers use specialized Duluth pack-style luggage designed for both easy portaging and loading into canoes.

Native Americans of many different tribes practiced "canoe camping" regularly, albeit as a means of transportation rather than a recreational activity. Before the age of roads, canals, airplanes, etc., the most effective way to travel across the vast expanse of northern wilderness was to navigate the countless small waterways that dotted the landscape as far as one could see. The canoe is perfect for traveling through these areas - light and relatively easy to carry, fast, able to traverse a wide variety of different water ways (small streams to intense rapids to huge lakes), and able to carry large loads.

It was for all these reasons that the early explorers of North America quickly adopted the use of the canoe, followed by missionaries and Voyageurs. Once trading posts were established in the interior, the canoe continued to be the primary transportation method, supplying such posts with regular canoe brigades. In northern Quebec, this practice continued until the middle of the 20th century.

As the "wilderness" of the Americas was tamed by railroad and later roads, the canoe as a means of primary transportation lost its practicality for obvious reasons. It turned into a recreational sport, a way for Americans and others to experience the pre-European America, and have a glimpse of a formerly never-ending wilderness. While recreational canoe camping has been enjoyed since the late 19th century by adventurous individuals, it was not until the late 20th century that, with the advent of camping consumer goods, it gained mass appeal.

The history of the Grand Portage, MN is an excellent metaphorical microcosm for the larger change and the eventual invention of the idea of "canoe camping"...for fun.

An early proponent and popularizer of canoe camping was George W. Sears, a sportswriter for Forest and Stream magazine in the 1880s, whose book Woodcraft (1884), told the story of his 1883, 266-mile journey through the central Adirondacks in a nine foot long, ten and a half pound solo canoe named the Sairy Gamp. He was 64 years old and in frail health at the time.

The adventure memoir Canoeing with the Cree relates Eric Sevareid's youthful journey with a companion from Minnesota to Hudson Bay in 1930.

In Canada, Bill Mason was a well-known author, artist, filmmaker, and environmentalist who through several books and films published in the 1970s greatly advanced the popularity of canoe camping.

Like Mason and Sevareid, a number of modern-day canoeists have retraced the historic routes of the fur-traders and voyageurs and published books about their experiences. Noteworthy examples from Canada include "Coke Stop in Emo: Adventures of a Long-Distance Paddler" by Alec Ross, "Canoeing a Continent: On the Trail of Alexander MacKenzie" by Max Finkelstein and "Where Rivers Run" by Joanie and Gary McGuffin.

In the "Source to Sea expedition" of 2005, two students from North Carolina State University paddled 2,150 miles down the Mississippi and Atchafalaya Rivers to support the Audubon Society's Upper Mississippi River Campaign.