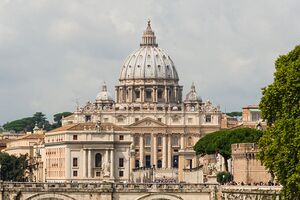 The Catholic Church is the third largest scouting partner of Boy Scouts of America.[1] They also sponsor scouting in many other countries of the world as their primary youth activity program.

The Catholic Church, also known as the Roman Catholic Church, is the largest Christian church, with more than 1.29 billion members worldwide.[4] As one of the oldest religious institutions in the world, it has played a prominent role in the history and development of Western civilisation.[5] Headed by the Bishop of Rome, known as the Pope, the church's doctrines are summarised in the Nicene Creed. Its central administration, the Holy See, is in the Vatican City, enclaved within Rome, Italy.

There are Five Series of Religious Activities and two International Activities, to which interested youth and adults will find fun and easy ways to learn more about their faith, Catholic role models and become more aware of the faith community and cultures around the world.

Eligibility: All youth and adults—Scouts or non-Scouts, Catholic or non-Catholic, male or female—are welcome to participate in the Religious Activities provided by the National Catholic Committee on Scouting®. The Five Series of Religious Activities, include: Rosary Series, Marian Series, Footsteps of American Saints, Footsteps of Modern Saints and Faith Series. The International Activities include International Awareness and Blessed Are Merciful - Keep The Lamp Burning Activities. All of these activities may be used by groups, families, schools, or any Cub Scout, Boy Scout, Venturer, Girl Scout, American Heritage Girl, or Campfire USA.