From ScoutWiki, For Everyone, Everywhere involved with Scouting and Guiding...
Revision as of 21:39, 10 November 2020 by Jørgen (talk | contribs)
(diff) ← Older revision | Latest revision (diff) | Newer revision → (diff)
Jump to navigation Jump to search 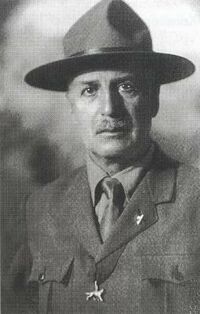 Von Bonstetten served on the World Scout Committee of the World Organization of the Scout Movement from 1927 until 1947.

He was awarded the Bronze Wolf, the only distinction of the World Organization of the Scout Movement, awarded by the World Scout Committee for exceptional services to world Scouting, in 1937.[1] He became President d´Honneur of the Scouts Alpine Club in 1946.[2]

Retrieved from "http://en.scoutwiki.org/index.php?title=Walter_von_Bonstetten&oldid=49329"
Category:
Cookies help us deliver our services. By using our services, you agree to our use of cookies.