Legend has it that the Dutch sailors tied this knot to remind them of their loved ones during their ocean voyages in the 16th century. The two intertwining overhand knots symbolize two intertwined lovers. The knot is sometimes used by goldsmiths to make a romantic piece of jewelry.

Like true love, the simplicity is deceptive, as this knot is difficult to tie correctly.

True lover's knot is also the name of a species of European moth. 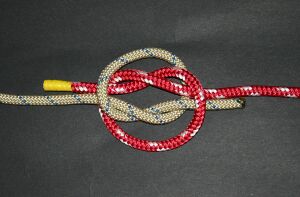 Intertwined overhand knots
Retrieved from "http://en.scoutwiki.org/index.php?title=True_lover%27s_knot&oldid=6991"
Categories:
Cookies help us deliver our services. By using our services, you agree to our use of cookies.