The surgeon's knot is a simple modification to the reef knot. It adds an extra twist when tying the first throw, forming a Double overhand knot, thus adding friction which makes the knot more secure. This knot is named for the fact that it is commonly used by surgeons in situations where it is important to maintain tension on a suture. Surgeon's knots are used in fly fishing as well as in tying quilts.

Some sources categorize the Surgeon's knot as a bend, since it can be effective as such.[1] It is used in this manner in jewelry-making to secure items (such as a bracelet) strung on stretch-type cord. 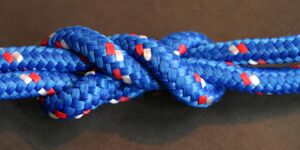 A surgeon's knot tied in nylon rope and tightened.