A puukko is the Finnish word for the traditional Finnish or Scandinavian style woodcraft belt-knife that is a tool rather than a weapon. The word is in the process of assimilation into English. 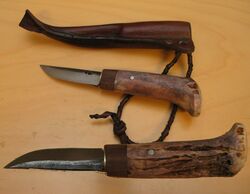 The basic components of a puukko are a hilt and a blade along with a sheath, which can be attached to a belt. The puukko's blade has a single curving edge and a flat back. The flat back allows the user to place a thumb or his other hand on it to concentrate the force. Puukkos are used both as a tool for all kinds of carving, especially to work wood, and to clean the catches of anglers and hunters. Some puukko designs have a slightly upwards or downwards curved point, depending on what purpose the knife has. A hunting puukko's tip is often curved downwards to make skinning and opening the animal easier and less messy. The blade is relatively short, usually about the same length as the handle. Fisherman's puukkos sometimes have a small dovetail on point to ease scraping off the innards of a fish.

Most puukkos have a slight shoulder but no choil, since the point where the edge ends and the handle begins is also the point where most power can be applied. A puukko often has no guard to stop the hand from slipping onto the edge, but this is of no great importance, since it is primarily considered a cutting tool, not a stabbing weapon. In cases where the knife and the hand are expected to get wet, like if the puukko is meant for gutting fish or game, some form of guards are carved into the handle. The traditional length of the puukko blade is the same as one's palm width, usually 90-120 mm. Carvers, huntsmen and leatherworkers favour shorter blades; woodworkers, carpenters and constructors longer. The Saami leuku, which is an outdoorsman's tool, may have blade up to 400 mm, it is more a machete or short sword rather than true puukko.

Both factory forged and hand forged blades are often laminated. A thin layer of very hard steel (traditionally crucible steel made from limonite iron) is sandwiched between two layers of softer metal, which make the blade less brittle and facilitates repeated sharpening. Before the 19th century, almost all iron in Finland was made from limonite on charcoal blast furnaces, which yield very pure and high quality iron suitable for crucible steel. Today both carbon steel and tool steel are used. The blade can be lightened and strenghtened with a fuller. 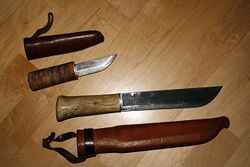 The traditional material for the handle is birch. Also oak, ash, pine bark, horn (especially elk and reindeer), scrimshaw and bone are used. Often the handle is made from various materials between spacers. Today, however, industrially made puukkos often have plastic handles.

In Finland and northern Scandinavia many men put great pride in carving their puukko's handle. Over generations, this knife has become intimately tied to Nordic culture, and in one or another version is part of many national costumes. A good puukko is equal parts artistic expression and tool. Making it requires a lot of different skills: not only those of a bladesmith, but also those of a carver, a jeweller, a designer, and a leatherworker to make the sheath — and if you master the difficult art of weaving birchbark, this is an opportunity to use it. Finest puukkos have blades of Damascus steel, and forging a blade using blister steel was considered the hallmark of a master smith. As the process of making wootz was rediscovered in Finland in the 1980s, some master smiths have made wootz puukkos. 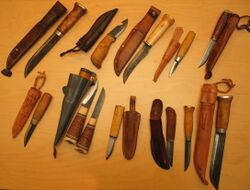 Getting one's first puukko is considered, in Finland, the symbol of coming of age for both boys and girls. This is about 5-7 years old. Men's and women's puukkos do not significantly differ. The only difference is that women's puukkos are often shorter, may have decorated sheaths, and are better suited for working with foodstuffs. Both boy and girl Scouts consider the puukko their scouting symbol as well as a handy tool. Getting a good puukko as a gift or present is considered a great honour in Finland.

In the Nordic countries, the puukko is an "everyday" knife that is used for everything from hunting, fishing, and garden work to opening boxes in the warehouse. Many puukkos are industrially produced by factories of which Fiskars is the most notable. Bearing of sharp objects which could be used as weapons was banned in Finland in 1977. Since then, the puukko has lost its visibility in public places and been restricted to household work, hunting and fishing. In many industries, e.g. construction, the puukko has been replaced by the Swedish Mora knife, which resembles the puukko but has a much cheaper and less durable construction. The mora knife's handle is typically plastic, and the blade is either stainless steel or of laminated construction; harder steel which forms the edge is clad in softer steel.

In Finland the carrying of knives without a permit or job related reason is prohibited in public spaces. Thus the only urban areas where they can nowadays be seen carried openly are garrisons. The puukko is the only civilian item which can be openly worn with combat gear without breaking the regulations, and most conscripts bring their own puukkos with them into military service. It is a custom of Finnish conscripts, Non-commissioned officers, and officer cadets to carry a decorated and engraved commemorative puukko of their year course as a part of thier uniform, not unlike a commemorative dagger. This is rationalized as the carrying of a handy tool, but it also doubles as a symbolic sidearm. However openly carrying a puukko, while technically illegal is not vigriously prevented. Construction workers often go to diners with a puukko hanging from their coveralls and in the rural and Northern parts of the land it is not uncommen to go shopping in the village stores wearing hunting clothes that includes a puukko.

The puukko has also given the root for Finnish language verb puukottaa "to stab".