From ScoutWiki, For Everyone, Everywhere involved with Scouting and Guiding...
Revision as of 10:42, 10 May 2021 by Egel (talk | contribs) (Text replacement - "Russian" to "Russian")
(diff) ← Older revision | Latest revision (diff) | Newer revision → (diff)
Jump to navigation Jump to search 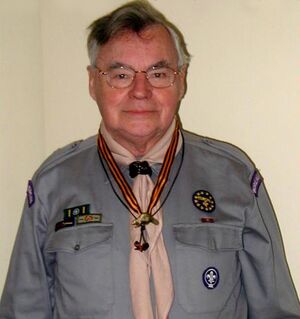 Piet J. Kroonenberg (9 May 1927 - 7 September 2016) was a scout leader, district commissioner and historical advisor to the European Scout Committee. He wrote books and articles on Scouting during the Second World War and the post-War Scouting in Central and Eastern Europe. For the latter work he has been decorated several times internationally.

A Dutch Scoutmaster and Scouting historian, Kroonenberg participated in the Dutch Resistance and the events of A Bridge Too Far.

Kroonenberg served in the British Army from 1944-1947. He was awarded the Bronze Wolf by the World Scout Committee for exceptional services to world Scouting, in 1996, for his outstanding contributions to International Scouting. Kroonenberg was also awarded the highest Russian Scout distinction, the Order of the Bronze Beaver.[1]

His books The Forgotten Movements and The Undaunted, as well as numerous articles, chronicle the history of Scouting in Europe.

Kroonenberg has been active in Scouting since 1935 and attended the 5th World Scout Jamboree in Vogelenzang, Bloemendaal, the Netherlands, in 1937.

Retrieved from "http://en.scoutwiki.org/index.php?title=Piet_J._Kroonenberg&oldid=49481"
Categories:
Cookies help us deliver our services. By using our services, you agree to our use of cookies.