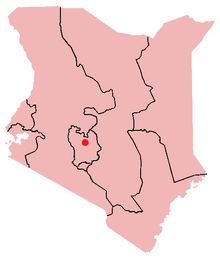 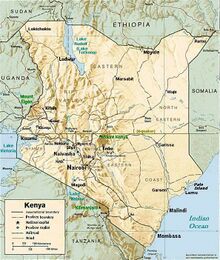 Nyeri, Kenya is the headquarters of Central Province (click to enlarge map)

Nyeri is a town in Kenya about 180km north of the capital Nairobi. It lies at the eastern base of the Aberdare (Nyandarua) Range that forms part of the eastern end of the Great Rift Valley and on the western side of Mount Kenya. Nyeri town is the administrative headquarters of Central Province and Nyeri District. The population was 98,908 in the 1999 census. [1]

The local scenery includes Mount Kenya. The main industry is farming. Coffee and tea are the main cash crops and maize is the staple food. There are many tourist destinations nearby.

In the early colonial days, Nyeri was a garrison, but it soon burgeoned into a trading centre for white farmers who produced cattle, wheat and coffee. They also came into town to drink and socialize. The White Rhino Hotel, Outspan Hotel, and the Aberdare Country Club at nearby Mweiga are living reminders of the old days.

The Wajee Nature Park lies just south of the town. It is now the burial place of Lord Robert Baden-Powell, a hero of the Boer War and the founder of the Scouting movement. He once wrote "the nearer to Nyeri the nearer to bliss". Baden-Powell's Paxtu cottage, now a small museum, stands on the grounds of the Outspan Hotel. He and his wife are buried in the town cemetery.

About 5 km along the road from the site of Baden-Powell's grave is the Mathari Mission settlement, which was constructed by Italian missionaries at the beginning of the 20th Century. The mission is home to a number of dwellings, stalls and the Consolatta hospital and School of Nursing. The hospital provides free care to the people of the surrounding area free of charge, and has a private wing for more wealthy patients. It is staffed largely by nuns of the Consolata order.

During the end of 1902, Richard Meinertzhagen marched a strong military column and although he met an equally spirited resistance from the Kikuyu warriors led by Wangombe Wa Ihura, who inhabited the area between Mount Kenya and the Aberdare ranges.The Kikuyu were defeated since their spears and arrows were no match for the european rifles.

After Meinertzhagen's victory, a decision was reached to site a British post close to a little hill at the slope of Mt Kenya. On December 18th 1902, Nyeri was born. The post took its name from the little hill. The Kikuyu called the the hill Kia-Nyiriwhile their maasai neighbours called the hill Na-aier.

Shortly after the establishment of the post, european settlers and missionaries and indian merchants began to migrate into Nyeri.

Retrieved from "http://en.scoutwiki.org/index.php?title=Nyeri&oldid=49834"
Categories:
Cookies help us deliver our services. By using our services, you agree to our use of cookies.