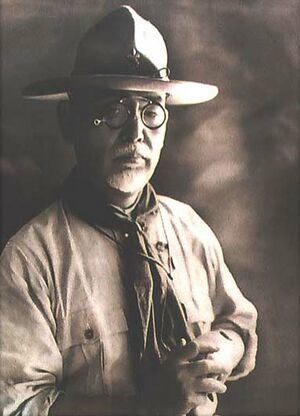 Count Gotō Shinpei (後藤 新平?, 24 July 1857 – 13 April 1929) was a Japanese statesman. He served as the head of civilian affairs of Taiwan under Japanese rule, the first director of the South Manchuria Railway, the seventh mayor of Tokyo, the first Chief Scout of Japan, the first director of NHK, the third principal of Takushoku University, and the Home Minister and Foreign Minister of Japan.

Gotō was born in Isawa (present-day in Iwate Prefecture). He entered Sukagawa medical school in Fukushima prefecture at the age of seventeen, and became a doctor in Nagoya, Aichi after graduation. In 1877, he served as a government medic during the Satsuma Rebellion. At the age of 25, he became president of the Nagoya Medical School.

Having distinguished himself through his work at the Nagoya Medical School and at the military hospital in Osaka during the Satsuma Rebellion, Gotō joined the Home Ministry’s medical bureau (衛生局) in 1883, eventually becoming its head. While at the ministry, in 1890 he published his Principles of National Health (国家衛生原理) and took part in the creation of new sewage and water facilities in Tokyo. This recommended him to Army Vice-Minister Kodama Gentaro (1852-1906), who made Gotō chief of the Army Quarantine Office looking after the return of more than 230,000 soldiers from the Sino-Japanese War (1895-95). After the war, Gotō returned to the Home Ministry, but remained involved in overseas affairs, advising the new Japanese administration on Taiwan about health issues. In 1896, Kodama, now governor-general of Taiwan, asked Gotō to join him there, eventually making him the first civilian governor of the island in 1898.[1]

In 1890 Gotō was sent by the Japanese government to Germany for further studies.[citation needed]

During the First Sino-Japanese War (1894–95) Gotō served at the Port of Hiroshima and worked on the quarantine of returning soldiers. His work was noticed by Kodama Gentarō in the Imperial Japanese Army. At the end of the war, China ceded Taiwan to Japan in the Treaty of Shimonoseki. Kodama became the Governor-General of Taiwan, and Gotō was asked to become the head of civilian affairs in his government.

As a doctor by training, Gotō believed that Taiwan must be ruled by "biological principles" (生物学の原則), i.e. that he must first understand the habits of the Taiwanese population, as well as the reasons for their existence, before creating corresponding policies. For this purpose, he created and headed the Provisional Council for the Investigation of Old Habits of Taiwan (臨時台湾旧慣調査会).

Opium addiction was an endemic problem in China at the time, and Taiwan was no exception. Gotō recommended a policy of the "gradual" prohibition of opium. Under this scheme, opium could only be purchased from licensed retailers. In addition, as government revenues from opium sales became extremely lucrative as a result, Gotō used opium sales licenses to reward Taiwanese elite loyal to the Japanese empire and those who assisted in the suppression of the Taiwan Yiminjun, an armed group that resisted Japanese rule. The plan achieved both its purposes: opium addiction dropped gradually and the activities of the Taiwan Yiminjun were undermined.

Gotō worked for the government monopolization of sugar and camphor and also for the development of railways in Taiwan.

In 1906, Gotō became the first director of the South Manchuria Railway Company. In 1908, he returned to Japan as Minister of Communications and the head of the Railway Bureau (Tetsudoin), under the second Katsura administration. In 1912, Gotō became director of the Colonization Bureau (Takushokukyoku). A close confident of Prime Minister Katsura, he assisted in the formation of the Rikken Dōshikai political party after the Taisho Political Crisis in 1912. In 1916, Gotō became Home Minister, and in 1918 (in the Terauchi administration), Foreign Minister.

A strong believer in Pan-Asianism, Gotō pushed for an aggressive and expansionist Japanese foreign policy, and strongly endorsed the Siberian Intervention. Gotō served as Mayor of Tokyo in 1920, and again as Home Minister in 1923, contributing to the reconstruction of Tokyo following the 1923 Great Kantō earthquake.

In 1924, Citizen Watch Co.'s forerunner, the Shokosha Watch Research Watch Institute produced its first pocket watch, and presented it to the mayor of Tokyo, Gotō Shimpei. Gotō named the watch ‘citizen’ with the hope that the watch, then a luxury item, would one day become widely available to ordinary citizens.[2]

Gotō died of a cerebral hemorrhage in 1929. His papers are preserved at the Gotō Shimpei Memorial Museum, which is situated in his birthplace, Mizusawa City, in Iwate Prefecture.

Gotō was made the first Chief Scout of Japan and tasked with rebuilding the organization. As Minister of Railways, Count Gotō traveled around the country, and was able to promote Scouting all over Japan in his spare time.

Retrieved from "http://en.scoutwiki.org/index.php?title=Gotō_Shinpei&oldid=38182"
Categories:
Cookies help us deliver our services. By using our services, you agree to our use of cookies.