Difference between revisions of "Edward N. Cole Canoe Base"

Edward N. Cole Canoe Base or Cole Canoe Base (also called CCB for short) is a camp reservation for the Detroit Area Council / Boy Scouts of America in Alger, Michigan. This camp has been a nationally accredited "A" Rated Camp since 1980. The camp was originally called the Rifle River Scout Canoe Base. 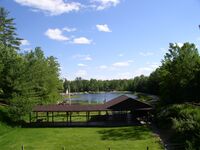 Cole Canoe Base has a history dating back to the mid-late 1960s first starting out as a rack of canoes sending people out to canoe on the Rifle River. In its nearly 40 year history of offering a summer camp program, it has grown to be an outstanding camp thanks to the boy scout troops that come here from across the region and the outstanding staff that work at Cole Canoe Base all summer and year round. The camp also provides experienced scouters with several canoe trips. Among these are the 50 mile, 70 mile, and as of 2005, the 100 mile.

File:DSC 0544.JPG
A picture from a closing flag retreat of "The A Team" saluting the flag prior to lowering the flag. This was taken on June 2006

At the beginning and end of every week. Every troop gets to witness a real flag ceremony that the U.S. Military does. A command is given and the scouts salute the flags. This is followed by a single cannon shot and finally, each flag is presented.

Beast Feast is an tradition held every Monday in the Outdoor Skills program area. Every troop brings in a dish for every one to try out. The main thing about this festivity is waiting in line.

Crafts on Fire was introduced to Cole Canoe Base during Summer Camp 2006. Immediately after Beast Feast on Monday, scout travel down the camp road to the Craft Pavillion for art and craft activity that contain fire.

Vespers occur on Sunday and Tuesday during the weeks on camp. This is technically a church service held at the Michael Wearn Memorial Chapel or John Dumas Pavillion if weather permits. Many scouts and staff attend service.

L.O.S.T. is an event also on Wednesday at Outdoor Skills that is subjected to Orienteering. A huge orienteering course is built within the area and scouts are given tasks to do such as putting up a tent blindfolded. This was also introduced in 2006.

Scuba and Snorkling are held at the Bosco Lake Aquatics Area. You must be an experience swimmer to be able to partipate.

Movie Night is an event that also falls on Wednesday. A movie that has been pre-chosen is played for scouts and scoutmasters to see. This program developed as part of a plan to host a campwide program in the event of a rainout Thursday night. Due to its popularity it was moved to a regular camp event in the summer of 2002.

The Paul Bunyan Lumberjack Festival is a Thursday Tradition. Down at Bosco Lake, activities such as tomahawk throw & crosscut sawing competitions occur. A rootbeer chug usually follows the lumberjack events.

The Ice Cream Social happens immediately following the lumberjack festival. This event takes place at the Wm. Kamman Administraion Center. Scouts are able to choose from vanilla, chocolate, blue canoe (blue moon), Superman ice cream. The grand one of them all is the Scoutmaster Special. This is a mountain full of every ice cream & toppings with a cherry on top. If it is allowed, the staff would be able to throw a party for the scouts. 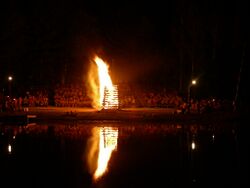 A View of one of the Weekly campfires from the opposite side of Bosco Lake
File:DSC 07081.JPG
A person standing in front of one of the campfires held each week during the summer camp season. The person you see is over 6' 5" tall.

River Rat Rodeo is Friday Festivity that happens during Midday and troops compete in water activities such as war canoe.

The Traditional Closing Campfire is always the best celebration. All troops attend this campfire following the Closing Flag Retreat. The campfire gets bigger and greater every year. The campfire is closed with a photo slideshow of how much fun the scouts had and a wonderful fireworks display. Troops prepare for to head home the next morning.

Cole Canoe Base has 16 wonderful campsites including a flagpole, a fire ring and latrine. The following are campsites:

The camp currently has 1 winterized cabin on the Western Region of camp or on the west side of the Rifle River. White Pines is a cabin and a campsite (not confused with White Pines campsite)