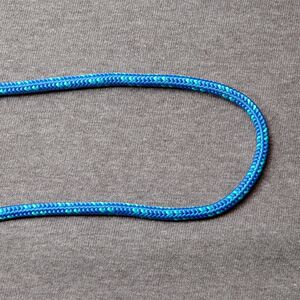 A bight of rope

The term bight is used in knot tying to refer to any curved section, slack part, or loop between the two ends of a rope, string, or yarn.[1] An important concept, the term is used extensively in the description of knots and the discourse of knotting and related subjects.

A familiar practical use is finishing a knot by passing a bight, rather than the end, to make a slipped form of the knot which is more easily untied. The traditional bow knot used for tying shoelaces is simply a reef knot with the final overhand knot made with two bights instead of the ends.

The term is also used in a more specific way when describing Turk's head knots, indicating how many repetitions of braiding are made in the circuit of a given knot.[2]

The phrase in the bight (or on a bight) means a U-shaped section of line is itself being used to make a knot. Specifically this means that the knot can be formed without access to the ends of the rope.[3] This can be an important property for knots used in situations where the ends of the rope are inaccessible, such as forming a fixed loop in the middle of a long climbing rope.

Many knots normally tied with an end also have a form which is tied in the bight, for instance the bowline and the bowline on a bight. In other cases a knot being tied in the bight is a matter of the method of tying rather than a difference in the completed form of the knot. For example the clove hitch can be made in the bight if it is being slipped over the end of a post but not if being cast onto a closed ring, which requires access to an end of the rope. Other knots, such as the overhand knot, cannot be tied in the bight without changing their final form.