The 2005 National Scout Jamboree was the 16th national Scout jamboree of the boy Scouts of America and was held from July 25, 2005 through August 3, 2005 at Fort A.P. Hill, Virginia. Normally, the next jamboree would be held four years afterward in 2009, but the date was changed so that the next jamboree could take place in 2010, the centennial anniversary of Scouting in the United States.

The 2005 National Scout Jamboree was divided into 20 sub-camps, named after living American explorers. The subcamps were then group into four Regions. 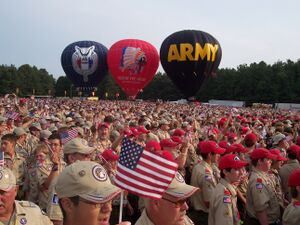 View of the audience at the Arena Show

Helicopter arriving at the Arena Show

Three Arena Shows were planned to be held during the jamboree. Allan Gibbs was the director of Arena Operations.

The first Arena Show was originally planned to be held on July 27, 2005. The first show was a staff show, and a youth arena staff member served as MC. The show also featured a staff barbeque and a speech from the Chief Scout Executive, as well as a preview for what was to come during the rest of the week.

President George W. Bush was scheduled to attend the first show, along with Senator Bill Frist but was not able to attend. The first show was finally cancelled due to extreme temperatures. However, Frist was already en route to the show when it was cancelled, and consequently delivered his speech. He emphasized the Support our Scouts Bill recently passed in the Senate. A number of participants and staff members were treated for heat exhaustion and heat stroke while Frist was delivering his speech--at one point, his voice was competing with a helicopter airlifting one victim to a nearby hospital. It also began to rain heavily as Scouts returned to their campsites.

The second show set a jamboree record for the most attendants. President Bush did speak at the second show regarding the importance of Scouting. Jim Fowler, as well as other numerous dignitaries visited and spoke during the closing show. It concluded with both a laser show (originally scheduled for the first show, using music from Epcot's IllumiNations: Reflections of Earth), and a fireworks show.

At the jamboree, Scouts had the chance to earn five activity patch segments to place on their uniform around the jamboree patch. To earn each segment, Scouts had to complete certain requirements over the course of the 10 day jamboree. The segmentss essentially encouraged the Scouts to see as much of the jamboree as possible. The five segments are Action Centers, Outback Centers, Activities, Duty to God and the 5-K run.

Scouts had to participate in 8 of the following 10 events found in each region's Action center.

Scouts had to participate in 4 of the 9 Outback Center activities.

Scouts had to visit 5 of the 9 Activities in the exhibits and display section.

Scouts had to complete the following requirements:

Scouts had to complete a 5 Kilometer Run/Walk. The US Surgeon General took part in this run. 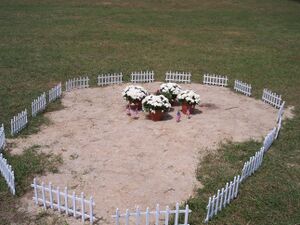 Memorial set up at the site of the disaster

Contractors were hired to assist in the setting up of a large tent in one of the sub-camps at the Jamboree. Some of the adult leaders, in true scout fashion, assisted the contractors in setting the poles. Due to the zoning and the length of the pole, the pole made contact with a electric cable. Those that were tragically killed were: Michal J. Shibe from troop 129, Mike Lecroix from troop 711, Ronald Bitzer from troop 129, and Edward Powell. Mike Shibe had two sons at the Jamboree and Lecroix had one. For more information about the circumstances surrounding this accident, check any major newspaper archive.