The 1st World Scout Jamboree was held from 1920-07-30 to 1920-08-08 and was hosted by the United Kingdom at Kensington Olympia in London. 8,000 Scouts from 34 nations attended the event, which was hosted in a glass-roofed building covering an area of 6 acres.

It was at this event that Baden-Powell, the founder of Scouting, was acclaimed the Chief Scout of the World.

The Olympia arena was filled with a foot-(30 cm)-deep layer of earth, which was turfed over, enabling the Scouts to pitch tents within the glass-roofed hall.

However, around 5,000 of the Scouts were encamped at the Old Deer Park in nearby Richmond. The Scouts rotated in and out of Olympia to give them all the opportunity to participate in the events there.

Chief Scout of the World

In order to honour Baden-Powell's role as the founder of Scouting, it was suggested by James E. West, the Chief Scout Executive of the Boy Scouts of America that he be awarded the title of Great Indian Chief. [1]

However, during the initiation ceremony, one of the young Scouts shouted out "Long live the Chief Scout of the World", and so it became Baden-Powell's official title within Scouting until his dying day.

No other Scouter has held the title since Baden-Powell, as it cannot be conferred by any national sovereign or premiere. 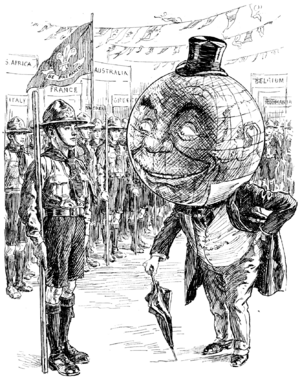 The League of Youth
War-weary World (at the Jamboree). "I was nearly losing hope, but the sight of all you boys gives it back to me." Cartoon in Punch magazine 4 August 1920, referring to the 1st World Scout Jamboree in the context of the aftermath of World War I

Baden-Powell gave a closing speech at the end of the Jamboree:

"Brother Scouts. Differences exist between the peoples of the world in thought and sentiment, just as they do in language and physique. The Jamboree has taught us that if we exercise mutual forbearance and give and take, then there is sympathy and harmony. If it be your will, let us go forth fully determined that we will develop among ourselves and our boys that comradeship, through the world wide spirit of the Scout brotherhood, so that we may help to develop peace and happiness in the world and goodwill among men". [2]

Of the twenty Jamborees that have taken place since 1920, there has never really been one that replicated that first event.

Many lessons were learnt from the first World Scout Jamboree, including the acknowledgement that an indoor venue was too restrictive for the activities and numbers of Scouts who would attend.

It was also realised that above all else, a Jamboree is a means of developing a spirit of good comradeship between the boys of many nations and the more that aspect can be stressed, the more successful a Jamboree becomes.

Amongst the thousands of Scouts, there was also a selection of rather interesting visitors to the Jamboree:

Retrieved from "http://en.scoutwiki.org/index.php?title=1st_World_Scout_Jamboree&oldid=37799"
Categories:
Cookies help us deliver our services. By using our services, you agree to our use of cookies.