The ScoutWiki Network wikis will be moved to new server on January 26th. The wikis will be set read only at 21:00 UTC, and expected to be back in fully working condition by same day 23:59 UTC. During this time wikis might be unavailable for a short while. We apologize for the inconvenience and thank you for your patience.
Cookies help us deliver our services. By using our services, you agree to our use of cookies.

A Zeppelin bend is an excellent all purpose bend: it is a secure, easily tied, and jam-proof way to connect two ropes. Though its simplicity and security are matched by many other bends, it is unique in the ease with which it is untied, even after heavy loading. It is also referred to as a "Rosendahl bend", both names stemming from its use to moor airships (Zeppelin being a synonym for airship, and Charles Rosendahl being the airship captain who popularized this bend by insisting it be used to moor his craft). 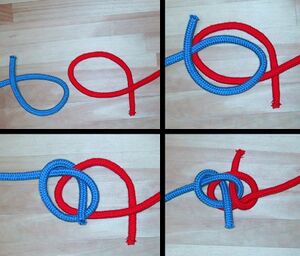