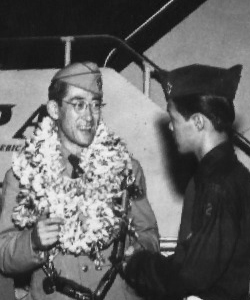 Count Yorihiro Matsudaira (松平頼明, Matsudaira Yorihiro?), Riji of Hongō Gakuen, who was the descendant of the feudal lord of the former Takamatsu domain, served as the International Commissioner of the Boy Scouts of Japan as well as president of the Boy Scouts Council of Kagawa prefecture. He was one of the original founders of Japanese Scouting in 1922.

Count Matsudaira, whose namesake was a daimyo of the late Edo period, the ninth lord of Takamatsu, was the 13th head of the Matsudaira family. He established a troop in Tokyo, now Gakushūin Group 1 in Toshima. He had an extended tour of the United States, during which he was a leader of the delegation of 22 Japanese Boy Scouts to the National Jamboree of the Boy Scouts of America, held at Irvine Ranch in southern California in July 1953 and later spent a month at the Schiff Scout Reservation in New Jersey attending the national training school for Scout executives. He also visited the Arthur A. Schuck, Chief Scout Executive at the national office of the Boy Scouts of America in New York City.