The World Scout Jamboree, also officially denominated with the French title Jamboree Scout Mondial, is a Scouting jamboree, typically attended by several tens of thousands of Scouts, aged 14 to 17, from all over the world.

The first World Scout Jamboree was organized by The Boy Scout Association in London. With exceptions for the war years, it has been organized approximately every four years, in the more recent years by the World Organization of the Scout Movement (WOSM), in different locations over the world. The 21st World Scout Jamboree in 2007, to be organized in Hylands Park, Essex, United Kingdom, will be celebrating the Centenary of Scouting.

The world jamborees are organized by the World Organization of the Scout Movement.[1] The Scouting programme became an international success following its founding by Baden-Powell in 1907. With is continuing growth, the founder of the movement saw a need for a gathering of representatives of Scouting from all around the world. The general aim was to foster a worldwide brotherhood, and to help the young boys in the movement learn about other peoples and nations by direct interaction with them.

However, the outbreak of the First World War in 1914 delayed any plans for such an event. It was not until 1920 that the first World Scout Jamboree could be realized. It was held in the Olympia halls in Kensington, London. 8,000 Scouts from 34 countries attended the event.

Cartoon in Punch, published in 1929 for the 3rd World Scout Jamboree

Thereafter, a Jamboree has been held every four years. There are two exceptions to this series: no Jamboree was held between 1937 and 1947 because of the Second World War, and the 1979 Jamboree, which was to be held in Iran, was cancelled due to the political upheaval in the region at that time. The Jamboree has been held in different countries around the world. The first seven Jamborees were held in Europe. The eighth World Jamboree was held in North America where the tradition of moving the Jamboree among the continents began. As yet, the continent of Africa is the only one which has not hosted a World Scout Jamboree.

To replace the cancelled event of 1979, the World Scout Committee determined that an alternative celebration, the Jamboree of the Year should take place. Several regional camps took place, along with countless Join-in-Jamboree activities - designed to allow Scouts from around the world to participate in an activity that thousands of other Scouts around the world were also participating in at the same time. This Join-in programme is being reproduced again as part of the Scouting 2007 Centenary celebrations.

So far, the greatest attendance of all Jamborees was in 1929, where over 50,000 members from around the world descended upon Birkenhead in the north-west of England. This number represented the permanent contingent who remained for the entire event. They were joined by hundreds of thousands of visiting Scouts who participated on a day basis.

The first Jamboree was more akin to an exhibition of Scouting, allowing visitors to see how things were done in other parts of the world. The Second Jamboree was conducted on a camp basis and each successive Jamboree has developed on this format where the programme is typically more activity oriented, with plenty of time for Scouts from different nations to interact and learn about each other in less formal ways than an exhibition would allow.

The next Jamboree will be in 2007 and coincides with the Scouting Centenary celebrations. Because of this, the honour of hosting the event has again been bestowed upon the United Kingdom, as the birthplace of Scouting. It is expected that 40,000 young people will be camping in August at Hylands Park in Essex. It is also expected that hundreds of thousands of day visitors will attend events in the south-east of England as part of the Jamboree.

There are up to ten smaller Jamboree (or Jamborette) events held each year around the world. This includes Regional Jamborees, which are held every three years in their areas of the world. Scouts from outside these regions are invited, but attendance is generally lower (for example, the EuroJam 2005 event hosted 10,000 Scouts, mostly from Europe).

National associations, and sub-national groups, also organise a number of events, such as the WINGS event, which is organised by a County level body. 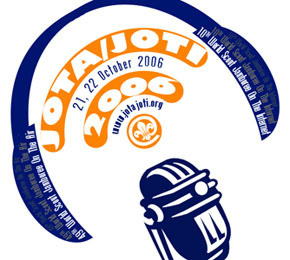 Jamboree on the Air

Jamboree on the Air, known by its acronym JOTA, is an international Scouting and Guiding activity held annually on the third full weekend in October. The event was first held in conjunction with the fiftieth anniversary of Scouting in 1957, and was devised by a radio amateur with the callsign G3BHK. It is now one of Scoutings largest events.

The event is recognised as one of international participation by the various Scout and Guide organisations, and supports several awards which are a part of Scouting and Guiding programmes.

Jamboree on the Internet

Jamboree on the Internet, known by its acronym JOTI, is an international Scouting activity held annually. Participants, through the use of designated Chats from all over the world, can contact their fellow scouts by means of the Internet. Common communication methods include ScoutLink (IRC), e-mail, and VOIP. This provides the Scouts with a means of learning about fellow Scouts from around the world. JOTI.org reports that JOTI had over 4,000 participants online at one time in 2005.

Special Internet jamborees may also be organized in conjunction with local, national and international Scouting events which are held at other times of the year.

Jamboree on the Trail

Following on the idea of the Join-in events from the World Jamboree Year, Jamboree on the Trail (or JOTT), is simply a co-ordinated event where Scouts around the world simultaneously participate in local hikes. It takes place in May on an annual basis.

This type of event allows Scouts to take part in activities at the same time as other Scouts, promoting the idea of the Scouting brotherhood. Participants are awarded a JOTT badge as a recognition of having participated in this worldwide event.

Retrieved from "http://en.scoutwiki.org/index.php?title=World_Scout_Jamboree&oldid=49755"
Categories:
Cookies help us deliver our services. By using our services, you agree to our use of cookies.